‘Blowout’ stirs up memories of city’s rich musical past 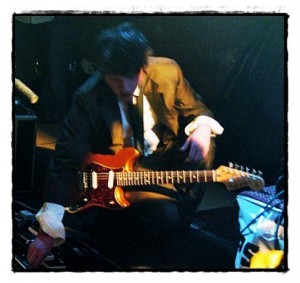 (Editor’s note: We’re pleased and tickled to announce that former Citizen writer Walter Wasacz is now contributing to The Review. Look for his weekly column on life in Hamtramck starting next week. This week, Walter reports on the Hamtramck Blowout, one of the largest music festivals in the country. Welcome back Walter.)

By Walter Wasacz
For fans of music, or fans of vibrant community life or fans of unseasonably warm late winter weather, they all had one thing in common last weekend: the Hamtramck Blowout, a mega-fest held in the city for the past 13 years in various bars, clubs and social halls.
In terms of overall quality, this four-day party was arguably one of the best — and that’s saying something considering previous events sponsored by alternative weekly the Metro Times featured performances by Eminem, White Stripes, Brendan Benson, The Go, Enemy Squad, the Detroit Grand Pubahs, Von Bondies, Matthew Dear and hundreds of others ambitious and obscure since 1998.
It wasn’t just spotty quality here and there; it was consistently solid across the board, with few misses at the 15 venues in the city and at the Majestic Theatre Center in Detroit, where the pre-party was held on two floors last Wednesday. There was something for almost anybody into a Detroit music vibe. Octopus, Detroit Cobras, the Sights, Cannon for heavy garage blues; Timmy’s Organism, the Friendly Foes, Black Lodge, Zoos of Berlin, the Cold Wave and Silverghost for punchy art rock jams; Dial 81, Jamie Register & the Glendales and Invincible for more urban rhythms and sounds; Detroit Threads for techno, house and all else electronic (special guests included the Detroit Techno Militia crew and Docile Records’ Andy Garcia).
It was easy to get nostalgic and misty-eyed about the past just by standing in front of the Painted Lady, the same building where Lili Karwowski once graced the punk rock nation by just being herself, no matter who were her guests: Iggy Pop, Wayne Kramer, Joe Strummer or the rest of the Clash. This modified Hamtramck vertical duplex operated as a speakeasy during prohibition, later evolving into Sam’s Cafe, the Columbia Bar and, most famously, Lili’s 21. The venue pre-dated the Blowout by two decades, and had an incredible run from the late 1970s to 2002, when Lili’s surviving sons (she died almost three years before) decided to close the business.
In its place Painted Lady has acquired an identity of its own. The paint on the walls, the lighting, the details in the back bar may be different, but something of the essence of Lili’s remains.
Last Friday, the Blueflowers were in full alt-country-psych-shoegaze form, getting rapt attention from fans leaning on the bar, against the wall in the corner near the front, seated around tables. So were the Swamp Sisters, featuring bassist-Small’s Bar co-owner and Detroit News scribe Melody Baetens (who lives in Hamtramck, by the way, and is one of the city’s biggest advocates in print and news media).
Baker’s Streetcar Bar — a name which celebrates the transit line that once connected Hamtramck and downtown Detroit by rail — hosted Bloodbird, a band featuring the talents of Michael Segal, who played guitar with the under-appreciated Majesty Crush a solid 20 years ago, and has since been active as a graphics artist of local and national renown. It should also be noted that Segal lived in Hamtramck at the time as did two of his bandmates (Odell Nails and David Stroughter).
At the Gates of Columbus, Black Lodge entertained by borrowing styles from an earlier era. Glammy traces of Ziggy Stardust-era David Bowie were blended with darker tones, musical and verbal, of Manchester groups like the Fall and Joy Division. The band played lean, mean and grim, but was still evidently having lots of fun: the singer engaging the crowd by jumping into it, dancing with the girls up front then inviting friends like Troy Gregory (the Witches, Dirtbombs) to join the writhing mass of bodies onstage.
Final attendance numbers weren’t available nearly a week after the event, but who’s counting? People got what they came for, crowds were well behaved inside and outside (according to police, no arrests or serious incidents were reported) and Hamtramck came away looking great once again, ready to blow it all out for a 14th time come next March. That’s consistency. Sounds like fun already.