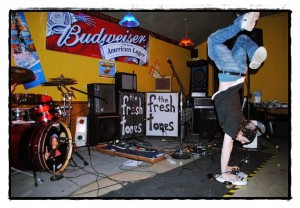 Some people called it the “Snowout” on Saturday night, but according to the books the 14th annual Hamtramck Blowout was a rocking success.

While the exact attendance figures are still unavailable, in terms of ticket sales this year’s event looks to have been the best ever. And the news only gets better – despite earlier reports to the contrary, event coordinator Eve Doster Knepp has decided to return next year to do it all again.

A number of things helped contribute to the success of this year’s Blowout. Additional presale locations were added to accommodate demand, and tighter security helped curtail underage drinking and prevent fights from happening.

“Everything turned out better than expected, and all-in-all everything was up,” said Doster.”We could not be happier.”

It may have been mostly smooth sailing, but that didn’t mean there weren’t some rocky waters to overcome. Thanks to the diligent work of utility crews, a potential crisis was diverted when a show-stopping power outage was quickly repaired on Saturday afternoon.

Unfortunately, nothing could be done about the snow, which – along with overpriced tickets, according to New Dodge Lounge bar owner Cathie Gordon – contributed to a below-average Saturday night.

“Attendance was down this year,” said Gordon. “It’s going to have to be revamped — $20-$25 charge is too much. It really doesn’t leave them (customers) any money to drink with. How many young people have that kind of money?”

Gordon also questioned how the Metro Times (the publication that sponsors the Blowout) spends the money it makes by throwing the event. She said that the cost of providing PA systems has gotten too high for the weekend to be really profitable and wondered if it would be possible for Metro Times to help defray some costs. However, Doster explained that the Blowout is not primarily a money-making venture and said that most revenue goes toward putting everything on.

“It’s more about the music than the money,” said Doster. “It’s the Metro Times’ way of kind of giving back.”

One Response to ‘Blowout’ whips up music fans despite bad weather