‘Joe’s Army’ on the march to save a buddy 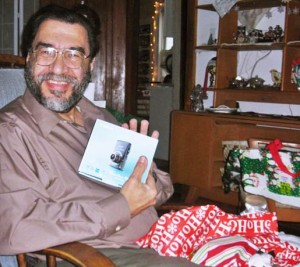 When miracles come — and they still do — they best come during the holidays.

Hamtramckan Vladimir “Joe” Vujic was waiting for one since late August, when he was hospitalized after months of severe shortness of breath and a cough that wouldn’t go away.

After several weeks of tests, including a biopsy, doctors diagnosed the condition as interstitial pneumonia, a pulmonary disease characterized by a scarring of both lungs. The disease has no cure and leads to rapid deterioration of the lungs. The outlook for longterm survival is bleak: few stricken with UIP last more than 3-4 years.

Vujic was transferred from St. John Oakland to Henry Ford Hospital, where a medical team evaluated him for a possible transplant. He was placed at the top of the list for a lung transplant — then spent the next two months in the hospital’s intensive care unit. Vujic had to fight off infections, was treated with chemotherapy and was found to have a low antibody profile in his blood serum.

The complications meant that a donor match would be even harder to attain. The transplant team decided that Vujic’s best chance was to increase the potential pool of donors by moving him to a national transplant center at Duke University in North Carolina.

Back in Hamtramck, another team was assembled, a support group called Joe’s Army. The group set up a website in late December to update family and friends about Vujic’s condition.

Members of Joe’s Army went several steps further. They organized smaller teams to go to Duke to spend time with Vujic, talk to medical personnel there whenever possible and report on his condition and prospects for a transplant.

On Dec. 20, Josh Saganski wrote that Vujic was undergoing treatments and exercising vigorously per doctors’ orders.

“Yesterday he was able to walk two entire miles, a significant improvement over the meager 90 feet or so he was able to manage before he arrived in North Carolina,” Saganski wrote. “This positive development bodes well for his rate of recovery post transplant. Dr. Zaas said that he is pleased with Joe’s effort and rate of physical improvement.”

A few days later, on Dec. 24, Vujic himself reported that waiting for a lung transplant was like “someone pushed a giant pause button.” But he also said he was prepared for the moment that the transplant team would come in to shave his chest and wheel him into surgery.

To his supporters in Joe’s Army, he wrote: “It’s Christmas Eve already and my thoughts refuse to go anywhere else but with you. I think about all the work and sacrifice done on my behalf and I feel truly blessed and humbled. I miss you all so much this holiday season and I hope and anticipate being with you on the next. God bless all your big warm fuzzy hearts.”

Later that night, Gary Saganski (Josh’s father) sent out this update: “Tonight at 9:30 p.m. we were called by (Saganski’s son) Noah who said that he had just heard from Joe. This may be the very call he described in his Christmas note. Unbelieveable! Joe was told that they were sending a surgical team to assess/harvest a possible donor’s lungs. They will know by 3 or 4 a.m. Christmas Morning. Stay tuned.”

But the match didn’t come. Saganski asked that the army “take a deep breath and keep looking at the door.” No Christmas miracle materialized.

That came on New Year’s Day, during the first hours of 2011, when a match was found. It turned out only one lung was transplanted, though doctors were confident that one good one was all Vujic needed.

Duke’s aggressive approach to organ transplant is to have patients up and active soon after surgery. Joe’s Army reported that Vujic was in some discomfort, but moving around the next day, his vital signs — his pulse/oxygen levels in particular — back up to near normal.

After a week to 10 days of recovery at Duke, Vujic will move to a nearby apartment and receive out-patient follow-up care before returning home. Joe’s Army is seeing him through the whole process.

The website is set up to take donations as well as report on Vujic’s progress. For more details, go here: http://vujictransplantfund.org/

We’ll keep following this story of courage, perseverance and teamwork in Street Life and report back what we learn. Get well soon, Vladimir.