‘Snowpocalypse’ season not really running up a bill for the city 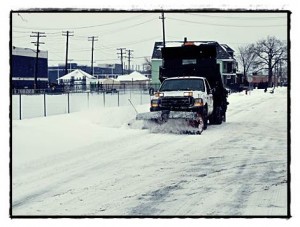 You’d think with the record amount of snow this year, Hamtramck would be just about out of money to do any more plowing.

That’s because we have been “lucky” in the sense that the snow has fallenall on single days as opposed to a little snow one day, and a little snow another day. The city budgeted $250,000 for this year’s snow removal.

As for potholes, the city’s roads don’t seem to be in as bad of shape – relatively speaking – as in years past. Cooper said repairs will have to wait until the snow clears to allow patches to hold better.

Over at the public schools, this week’s snowstorm came during a mid-winter break. Although kids were not forced to take off more snow days, the break means a delay in removing the snow.

Schools Superintendent Tom Niczay said the district cannot afford to call in employees on overtime to remove the snow. He said, however, that the sidewalks and school grounds will be cleared before kids return to school this Monday.

The school district has a $4 million budget deficit.

As for when this winter weather will end, that’s anyone guess. Officially, the first day of spring is March 20. The Detroit area is expected to be hit with another six inches or so of snow by Sunday with an ice storm possible on Saturday.

So far, the region has been blanketed with an extra two feet of snow more than in a typical year. Some climatologists blame the extra snowfall on global warming – meaning that from now on we can expect more snow for now on each winter.