Despite a national trend that has seen violent crime decline over the past three years, in Hamtramck it was on the rise in 2009. But fortunately, its rate of growth was slower than in years before.

The figure comes through the FBI from the Uniform Crime Reporting (UCR) Program, a program started in 1929 by the International Association of Chiefs of Police in order to meet a need for reliable and uniform crime statistics for the nation. According the UCR, violent crimes are defined as those offenses which involve force or threat of force.

One reason for the slowed-down rate of growth for violent crimes may be the proactive law enforcement of Hamtramck’s Police Department, which underwent a change in leadership last year when Mark Kalinowski took over as Chief of Police. Though he declines to take credit for anything – he says the officers are the ones out there doing the real job – he does say that increased police presence may contribute to the relatively low crime rate.

“Our guys are out there on traffic patrols more, and they’re more visible,” says Kalinowski. “There have been studies that show the area surrounding a squad car after it has pulled over a vehicle is safe from crime for about a thousand-foot radius, so that may have an effect.”

As far as other crimes go, Hamtramck has actually seen a decline in some cases. Robbery rates fell in 2009, as did the number of burglaries, regular larcenies/thefts and vehicle thefts. But on the converse, the number of arsons, aggravated assaults and forcible rapes were all up. The number of murders remained the same, although due to a slight decrease in population the murder rate also declined slightly.

Though it’s too early to tell, Kalinowski says he hopes that 2010’s statistics will also decline. However, because budget cuts loom large over the department, it is uncertain whether officers can maintain their current level of staffing through the rest of the year. Regardless of that fact, Kalinowski says his officers continue to perform in a professional and purposeful manner. 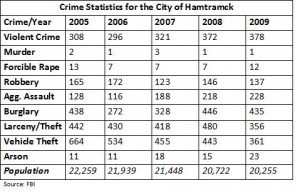