You may have noticed some new developments in town.

What used to be the John J. Skupny Funeral Home on Conant is now being converted into a restaurant called “Kabob House and Banquet.” The new owner of the building also knocked down the parking structure next-door.

It’s not known when the restaurant will open, although the owner may have a bit of a public relations challenge enticing customers to eat in a former funeral home. 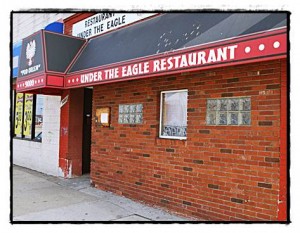 Speaking of restaurants, a Hamtramck landmark, Under the Eagle, closed down for good recently. According to a sign on the door, the restaurant had been in business for 38 years.

The former owner, Terenia, said in the note: “Thank you for your patronage. After 38 years, we’ve retired. Bog Zaplac.”
Under the Eagle, located on Jos. Campau near Jacob St., was one of three Polish restaurants in town. It gained fame when President George Bush (the first) ate lunch there after making a speech in the city.

Under the Eagle was also once home to the Hamtramck Rotary Club.

A prior deal to keep the restaurant open fell through, but that doesn’t mean the restaurant will go unused. Another sign on the building announces that it will continue to serve food, this time as Campau Coney Island.

Hamtramck’s one and only ice cream shop on Evaline St., around the corner from Jos. Campau, also recently closed down. The owner of the building is seeking someone to take over operations. 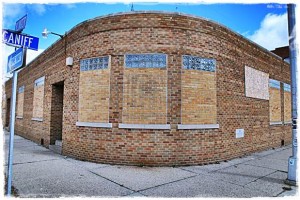 On Caniff, the former Motor Lounge, which was once considered one of the best techno nightclubs in the world, is being gutted. According to Hamtramck’s Director of Community & Economic Development, Jason Friedmann, the new owner wants to turn it into a banquet hall and bar.

But this development is highly speculative at this point, Friedmann added.