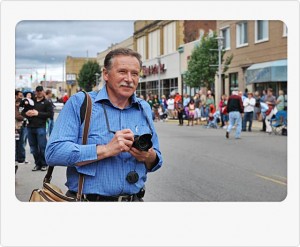 (Editor’s note: The following article has a series of painful puns. Consider yourself forewarned.)

Out on the concourse, there was good chicken to be had. But up on the stage, there was one lone Good Egg – resident Greg Kirchner, receiving that award from Mayor Karen Majewski.

It was easy, and then it was over. You could say it was over easy. Thankfully, there were no poachers spotted in the audience.

The mayor had scrambled to announce the award back in July, at her State of the City address. She remembers telling Kirchner, prior to that, that he would be the recipient, but wonders if he may not have eggs-actly kept that information in mind. Perhaps he was so busy, his brain was just a bit fried?

In any event, we caught up with the award winner by phone at his coop. So now, we bring you this eggs-clusive interview.

Greg, was the wait to actually get the award eggs-cruciating? Were you eggs-cited?

Kirchner: Not really. It was a surprise when she told me about it. I was just waiting after that, with more of a sense of some satisfaction, I suppose.

Do you feel you set a good eggs-ample for others?

Kirchner: I believe so. I mean, any kind of award that helps motivate people to do something for their community is great. Especially here, what with us losing so many people that used to be so active in Hamtramck over the past years.

What type of paying job do you have that lets you eggs-ist?

Kirchner: I have my own company, which serves as a distributor for a number of different food producers. One major product line is Polish Imports, particularly the sweets – candies, chocolates, cookies. I started the company in 1978. Of course, in those days there were many, many stores that carried Polish foods. Now, a lot of my business is out in the suburbs, where many of the stores have moved.

What motivates you to do something eggs-tra for your community?

Kirchner: When I was in college, I began working at the Polish Daily News. There was also, through doing that, a chance to work with a number of other organizations. You made a lot of friends, especially because everyone was volunteering, so there was that community spirit. From that, it can kind of just become second nature. I had to slow down some when my business took off. Then, of course, my wife (Hamtramck Public Library Director Tamara Sochacka) got the job at the library, and because there were only three employees at that time, I started putting in some hours there, volunteering.

How does it feel to be recognized for your eggs-cellence?

Kirchner: Well, that’s something you don’t really think about, when you’re volunteering, mainly because the work itself gives you a real sense of satisfaction – a good feeling. You don’t look for, or eggs-pect, this type of attention for it, but if and when it comes, it is nice. But certainly, I would be doing it anyway.

Anything else you’d like to add to the carton?

Kirchner: Other than, I have been filming things for awhile, and so I am looking forward to maybe doing some films, like documentaries, or for example I would be willing to share the footage if someone else needed it, say if they were doing a book, I have still photos. Television stations … whoever may need it. It’s a document of the late 90s in the city, and also the millennium change.