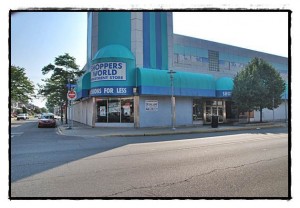 The former Shopper’s World building is drawing a lot of attention these days.

The city is seeking proposals for the building’s redevelopment.

“Everybody we talked to seemed enthused,” Friedmann said of the potential developers. “They all had good ideas for what to do with the commercial (floor).”

The city has received several suggestions from residents about what type of business they would like to see, such as a bookstore or office supply store.

But Friedmann said the developers are free to make their own suggestions in their proposals.

At this time, he was unable to release the names of any potential developers for the Shopper’s World project.

The developer chosen will finance the commercial part, while a portion of the city’s $15 million Neighborhood Stabilization Fund will cover the development of the residential floor.

The fund will also be used for other redevelopment jobs, such as the Veterans Park loft and several other demolition projects.

Proposals from the potential developers are due by Oct. 17.