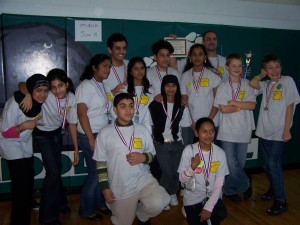 By Brad Neff
Review Specialwriter
Last Saturday (Nov. 14), the Kosciuszko Middle School Robotics team won a regional LEGO robotics competition in Allen Park. As I drove past the beautiful school complex, I couldn’t help but wonder if our team would win against a team from such a rich school district.
As my son and I walked up to the school, we walked past a sparkling new Cranbrook school bus, and we walked past the million dollar Allen Park Middle School Library.
Inside the school, we found a lot of teams, other teams from Hamtramck and rich suburb teams from all over the metro area–except the inexperienced Burton International team. When I walked up to the Kosciuszko display, I found smiling students and a laptop running videos of Robot Rescue High Technology programs.
During each match, the happy Kosciuszko students won a lot of points. In the end, they had more than twice the points of the other Hamtramck middle school team. They ended up with more points than the Troy team, the Cranbrook team, the Northville team–or any other team. It was a great day for the Kosciuszko kids. (Mr. Dobbyn’s Kosciuszko science technology robotics team has won a great deal in the past years.)
The Kosciuszko Robotics students have already learned the joy of learning. They have already learned that it’s okay to be smart. They have already learned the power of teamwork. They have already learned that knowledge and perseverance are crucial for success, both now and in the future. In time, all of these Kosciuszko Middle School students will probably join the FIRST robotics team at Hamtramck High School.
(Mr. Neff is a media specialist for the Hamtramck Public Schools.)