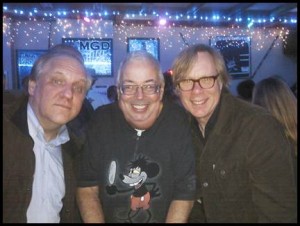 Toast (far right) enjoys a night out at Paycheck’s on Saturday for a fundraiser for buddy “Morrocco” (center). That’s another friend, Mark Niemenski, of Hysteric Narcotics fame, posing in the photo.

When it comes to good food and great times, Hamtramck has plenty to offer. In this column, we’ll talk about what’s happening at our bars, restaurants and other events that can be found throughout the city

Once again, indulge Toast once again and let me report that last Saturday’s fundraiser at Paycheck’s Lounge for cancer-stricken Mark Rowe, aka Morrocco, was a freakin’ smashing success.

Sheesh, by 9 o’clock the place was packed – something bar owner “Paycheck” needs to see more often.

Here’s a hint, old buddy: Book good bands. And speaking of that. Hey, Detroit rockers, come back and discover this divey jewel – it has a great sound system.

Spot on that night were the Orange Roughies and Junk Monkeys, both staples back in the mid-80’s when Hamtramck bars ruled the world. The Orange Roughies, by the way, just released a CD of their first album and their unreleased second album. You can order it through www.gangplankrecords.com.

As for Morrocco, who not only has cancer but is without medical insurance – is there anyone who does have insurance these days? – he had an insanely good time and was incredibly grateful.

“Even I can’t exaggerate my thanks and gratitude to everyone involved last night; everyone who attended, worked the doors, worked the press and especially the fantastic bands,” Morrocco said on his Facebook page. “It was the most fun I’ve had since I’ve come down with cancer. I received so many hugs and kisses that for one night I felt like the Maestro of Love again. The whole scene was overwhelming. If anyone tries to tell me life sucks, I’ll have some choice words to correct them. Thanks again to everyone!”

Before the night ended at Paycheck’s, Toast and girlfriend Mary Raetz and band buddy Mark Niemenski sped over to Skipper’s Bar on Conant at Evaline to catch our new favorite band, the Dexter Linwood Quintet.

We happened to run into a couple of local luminaries, notably Tom Stackpoole. Man, you are one wild guy, Tom.

And was that Walt and Lisa we ran into? Or was that earlier at the Strawberry Festival? Hmmmm … apparently that was a long day.

Oh, another side note, we had a great dinner earlier in the evening at Polish Village Café, where Toast, for some reason, had a problem pronouncing Poland’s beer of choice, Okocim, and ended up calling it “Pokeymon” all night.

OK, let’s move on to what’s coming up, and as usual the New Dodge Lounge, thanks to the booking talents of Toni Callwood, has been consistently offering some of the more interesting shows in the metro area.

Coming up on next Friday, May 18 (hey, this week we are giving you an early warning) are roots rockers Daniel Harrison & The $2 Highway.

The guys will be celebrating the release of their CD “Humidity.”
Admission is $8.

Hey you hound dogs, go out and support local music.