A Christmas message for The Review Publisher … 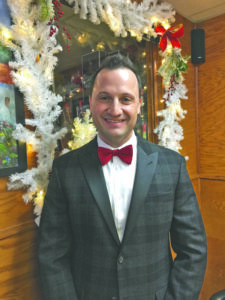 By John Ulaj
Publisher
I want to once again thank all of our readers, and all the great people of Hamtramck, for making The Hamtramck Review your go-to source for local news!
Merry Christmas, and a wonderful, and better, New Year to everyone!
This year, Christmas will be extra special. For most of next week, star-gazers will be able to catch a once-in-a-lifetime sight in the sky — and you might want to look quickly, as it won’t be around for long.
This “Great Conjunction” is also called the “Christmas Star” by some – a very rare event, where Jupiter and Saturn appear in the night sky at their closest points of visual overlap, a mere tenth of a degree apart.
It will also be the first time such a close conjunction has been observable since the year 1226 AD (it was actually this tightly compact in the year 1623 as well, but few could see it due to the weather, apparently).
The conjunction of the two planets actually happens every 20 years or so, due to the length of their orbit years and relative to our position of seeing them. But rarely are they this close together.
Think about it, it’s been almost 800 years since people have witnessed this phenomenon. To be alive and to see this is incredible, and a privilege.
The planets’ close approach to one another can be seen as early as Dec. 16, but the “real show” takes place the evenings of the 20th through the 22nd, according to sources.
The best time to see them is about an hour after sunset. Look to the southwest to see the two close objects fairly low in the sky. The brighter one is Jupiter; the dimmer one is Saturn.
What’s interesting about this phenomenon goes beyond the merely astronomical.
The world has struggled significantly of late. The US has not been spared, what with the severe challenges of COVID-19 and a contentious election, for example.
It can be easy to lose one’s Faith in times such as these, and begin to question, “God are you there — do you not see the pains and suffering of humanity, your creation?”
I, for one, am guilty of this, and definitely wrestling with these lockdowns and this quarantining, which could drive any person into mental exhaustion.
One thing I did take notice of is that, when an anomaly like this terrible COVID virus strikes, God compensates with one of His miraculous wonders, the rare treat of a Christmas Star.
In Revelation 22:16, Jesus said “I have sent My angel to testify unto you these things in the churches. I am the root and the offspring of David, and the bright and morning star.”
Yes, indeed, God has not forgotten about the sufferings and the evil that’s happening on the planet. I truly feel that The Lord will restore righteousness and justice soon.
For this very reason, he has brought forth the greatest gift to mankind, JESUS THE BEGOTTEN SON OF GOD, to perform this work:
“For unto us a child is born, unto us a son is given: and the government shall be upon his shoulder: and his name shall be called Wonderful, Counsellor, The mighty God, The everlasting Father, The Prince of Peace.
“Of the increase of his government and peace there shall be no end, upon the throne of David, and upon his kingdom, to order it, and to establish it with judgment and with justice from henceforth even for ever. The zeal of the LORD of hosts will perform this.” (ISAIAH 9:6-7)
My friends, the Christmas Star is a reminder from God that He understands our pains and sufferings, and to not lose Faith in Him.
He promised, ” I will not leave you nor forsake you. ”
May you have a wonderful Christmas.
Posted Dec. 18, 2020

One Response to A Christmas message for The Review Publisher …