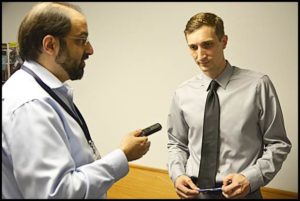 Councilmember Ian Perrotta (right) was censured by a bare majority of councilmembers.

By Charles Sercombe
In a rare move, the city council censured a fellow member.
During an emotionally draining council meeting on Tuesday, there was more than just a public rebuke at issue: the disciplinary move against Councilmember Ian Perrotta revealed a deep rift among the councilmembers.
The resolution to officially “censure” Perrotta was submitted by Councilmember Saad Almasmari, who chastised Perrotta for comments he made two years ago and a confrontation during a recent closed-door council meeting.
Councilmembers Anam Miah, Abu Musa and Fadel Al-Marsoumi joined in on the resolution of censure.
Councilmember Andrea Karpinski was opposed as well as Perrotta, but both asked their vote to be recorded as a non-vote.
So, what is a censure?
It is a public reprimand – or public shaming – that does not remove a councilmember from office.
It simply criticizes a member for his or her behavior or conduct.
(Editor’s note: Perrotta is a copy editor for The Review. He played no role in the editing or proofreading of this story.)
As for specifics of the censure, it’s long and complicated.
For the record, Perrotta said the allegations are unfounded and are an attempt to smear him. Perrotta further said it is an orchestrated attempt at preventing him to become a licensed attorney.
Perrotta is in his last semester at Wayne State University’s law school.
“The council used the resolution of censure for no purpose other than to destroy my reputation,” he said on his Facebook page the day after the meeting.
He is threatening to file a lawsuit against the city for defamation, saying it could jeopardize him from becoming an attorney.
The censure took issue with comments Perrotta said in 2017, but did not specify what those comments were other than being about “recent immigrant arrivals to Hamtramck insinuating that, as a group, they lacked basic knowledge of and adherence to community norms related to sanitation and property maintenance.”
The crux of the complaint was that Perrotta’s comment was of the mindset of a “European and Western cultural superiority over many of the immigrant cultures represented by members of this Council and the broader community.”
Perrotta said then his comments were taken out of context and was only meant to spur a citywide education program to get all households to dispose their garbage correctly.
There have long been complaints of households throwing out garbage in bags or loosely without using city-issued garbage cans.
As for the incidents that happened in a December closed-door meeting, Almasmari accused Perrotta of “physically assaulting a member with whom he disagreed and by attempting to provoke physical altercations with other members.”
Both Perrotta and Almasmari filed counter-charges of assault with the police department. Councilmember Miah also accused Perrotta of assaulting him.
Perrotta vehemently denies he assaulted anyone. Instead, he said he was pushed by Councilmember Miah into Almasmari and that he gently pressed his finger against Miah’s chest to ward him off.
He also said that Almasmari brushed his city-issued notebook against the side of his face.
None of the allegations have led to criminal charges or convictions.
Councilmember Karpinski was absent from the meeting. Mayor Karen Majewski said she did not see what happened because she is shorter than the others and that she could not see around them, but did say there was inappropriate behavior “on both sides.”
This isn’t the first time Perrotta has faced criticism from fellow councilmembers.
Councilmember Anam Miah submitted a resolution of censure against Perrotta in 2017 about Perrotta’s comments about how to educate the city’s immigrant population on the proper ways to dispose household garbage but withdrew it.
Again, Perrotta said his comments were not meant to disparage immigrant communities in the city, but only to formulate an education for the city at large.
In the meantime, there were several residents who said this spat casts Hamtramck in a bad light.
“This in-fighting makes me want to not live here,” said Jean Johnson.
This is not the first time there has been friction among city councilmembers.
The last significant flare up was in the 1990s when city councilmembers were at odds with each other and counter-threats of censures were made.
Until recently there has been relative peace among councilmembers for the last several years. But the nature of Hamtramck politics over the last several decades has consistently been contentious.
(The Review will have more on this subject in next week’s issue.)

Here is a link to the council resolution censuring Perrotta:

12 Responses to A city council divided