A day to toast our veterans and say thanks 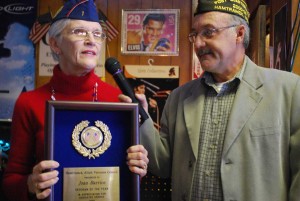 As the years go by, fewer and fewer vets are here to celebrate their day. But for those who still remain, Wednesday’s commemoration was festive and solemn at the same time.

Piast Institute President Ted Radzilowski, a Vietnam veteran, said the 20th Century was one of the bloodiest in history. The deaths during World War II alone total 56 million.

“All the horses of evil came out,” he said.

This year’s choice of “Veteran of the Year” was a first-ever. Joan Barrios, a Navy veteran, was awarded the honor. She is the first woman to receive the honor here in Hamtramck.

Barrios is retired from the Hamtramck Public School District and was in the Navy from 1962 to 1965.