A former city jewel gets a well deserved shining 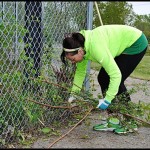 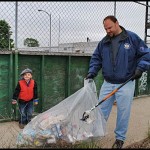 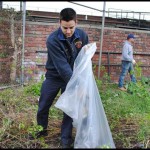 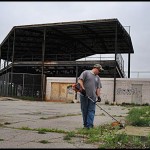 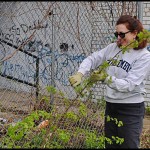 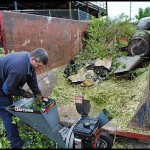 What do you get when you cross a dozen firefighters and a handful of volunteers with an unkempt historical landmark?

A big difference – as long as some power tools are involved.

That’s just what happened last Saturday (May 11) morning, when the Hamtramck Firefighters Association teamed up with local community members for a clean-up of the baseball grandstand in Veterans Park. After several intense hours the site was transformed from an overgrown, trash-filled mess to at least a shade of its former glory.

The job was actually made a lot easier by the groundwork laid last year, when members of the International Association of Fire Fighters (IAFF) Local 750 first took on the task of cleaning up the stadium. Before that clean-up the area had remained untouched for a number of years. “

In addition to the usual job of clearing out weeds and cutting down trees in the area around the grandstand, this year’s clean-up also cleaned out the old locker room building adjacent to the stadium. And of course, with the job being done by firefighters the door was also secured to prevent re-entry by vandals.

Aiding the firefighters were members from the community that included Chris Cornwell of Preserve Our Parks, Renay Witkowski from the Hamtramck Beautification Committee and Rebecca Binno Savage of Friends of Historic Hamtramck Stadium.

Matthew Wyszczelski, President of the Hamtramck Fire Fighters Association, said that future plans include keeping the park trash-free and painting the graffiti-covered walls of the buildings around the grandstands. With the assistance of Preserve Our Parks, the members of IAFF Local 750 also plan to maintain Veterans Memorial in the front of the Veterans Park.

“We feel that activities like this park clean-up are vital to helping build up the community. For too long the park has been left in disrepair, and we have lost a true jewel from our city,” said Wyszczelski. “We hope that we can build upon this clean-up and help bring the park back to being a place where people will want to visit and have their children play.”