A frequent flyer lands to spread a message about respect 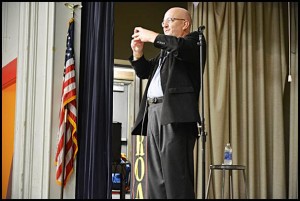 When Al Ulman is not entertaining corporate clients with his humor and magic show, he is teaching school kids the message of respect and how to deal with bullying. He recently brought his message to Dickinson East Elementary School.

“R-E-S-P-E-C-T
Find out what it means to me”
“Respect” by Otis Redding
By Charles Sercombe
Many in Hamtramck know him as Al Ulman, or maybe professionally as “Al the Only.”
Ulman now has another moniker: “Al the Respect Guy.”
That’s the name thousands of school kids across the country, and lately here in Hamtramck, know him by.
When Ulman is not presenting his mix of humor and magic to corporate parties and at nightclubs, he is spreading his word about respecting one another to school kids.
He calls this program R.O.A.R. – Respect Others Act Responsibly.
Ulman presented his educational message to several elementary classes in the Hamtramck Public School District this week. The Review caught up with him at Dickinson East Elementary School on Tuesday afternoon, where students piled into the school gym for Ulman’s presentation.
Ulman’s message is two-fold: If you want respect you have to show it, and if you come face-to-face with a bully, walk away and speak out to a trusted adult.
Ulman said the program came about several years ago when a teacher friend suggested he come up with a program as a companion to another one about positive behavior.
“That was the birth of the show,” he said. 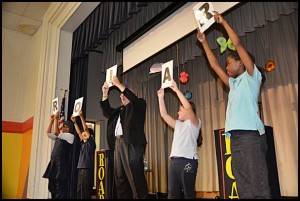 With plenty of fine-tuning and feedback from educators, Ulman says his school presentation has grown from a sideline to “an animal of its own.”
“This has become a passion for me,” he says. “It’s my way of giving back.”
When not on the road, which is frequent, Ulman now resides on the Hawaiian island of Maui. Yes, you read that right, Hawaii.
He moved from Hamtramck 14 years ago, but still maintains his family house across from city hall.
He logs over 80,000 miles in travel a year. So how do you leave the lush weather and scenery of Hawaii to do a show in a Midwestern city during winter? Well, there’s no magic to his answer.
“You can’t,” is Ulman’s explanation.