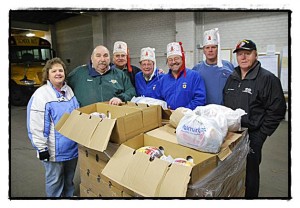 That’s John “Hippo” Hypnarowicz second from left posing with his buddies from the Warren Alhambra organization. They helped Hippo gather up over 60 frozen turkeys and trimmings for Hippo’s special needs kids he used to bus to and from school.

Just because John Hypnarowicz retired last year from his job as a bus driver for the public schools, it doesn’t mean he retired from a very special interest he has.

Whether he wants to or not.

For the last umpteen years Hypnarowicz, known as “Hippo” to his friends, drove special needs children to and from school. As you might guess, Hippo became attached to his kids, and kids certainly became attached to Hippo, who is about as big as the name suggests, but not in an unhealthy way.

Trust us on that.

So, Hippo and his wife, Mary, as well as a small army of volunteers, started up an annual Christmas party for the kids, complete with presents and food for their families, many of whom struggle financially.

The amount of love that filled up the various halls where Hippo and friends held these get-togethers was greater than the size of Santa’s bag of toys.

But all good things must eventually come to an end … right?

Hippo announced last year that he was stepping aside from the annual dinners because he had reached the end of the road in his career as a bus driver for the schools, and he kind of ran out of gas organizing the parties for the kids.

Hey, everyone gets to retire, right?

Hippo’s core groups of volunteers and supporters weren’t ready to call it quits.

He said that with a deep rumble of a belly laugh.

Come last Friday, he had collected enough money to purchase a little over 60 frozen turkeys and trimmings to make a nice holiday meal for all those kids and their families.

Some of those donations came from Hippo’s buddies, who are members of the International Order of the Alhambra, Sancho Caravan #216, which is based out of Warren.

If you know anything about Hamtramck, you know that a lot of folks who now live in Warren, especially those of a certain age, once lived in Hamtramck, and when push comes to shove, their heart is still here.

Several of the Alhambra members gathered together last Friday in Hamtramck, in the school bus garage, to help Hippo package up the food donations.

They even brought their fezzes to wear for a group photo.

The school district’s bus drivers later delivered the packages to the kids’ families.

Hippo and his crew may not be seeing the kids this year, but their spirit of giving and caring is sure making a visit.
Or, as Russ Smith of the Sancho Caravan said, they were inspired by the Prayer of St. Francis of Assisi, the Patron Saint of the Caravan, which says:

“It is in the giving that we receive.”

Let’s break that down for those of you perhaps reading this while e-mailing, texting or tweeting. …

2 Responses to A Hamtramck Christmas story …