A Jos. Campau tradition gets resurrected 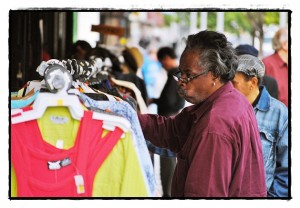 This weekend, the shops on Jos. Campau will be taking it to the street – literally. It’s the 2nd Annual Sidewalk Sale.

The sale is sponsored by the Downtown Development Authority (DDA), which has advertised the event in the Metro Times and Real Detroit in an attempt to attract shoppers from outside of Hamtramck. Beginning yesterday (Thursday Sept. 30), the sale runs through the weekend from 9 a.m. to 7 p.m. on Friday and Saturday, and on Sunday until about 5 p.m. for those businesses that are open.

Historically, putting on sidewalk sales used to be a function the Chamber of Commerce. Back in the heyday of the Chamber the city would host two to three sales a year, oftentimes in the spring and fall and sometimes during the summer. But with the Chamber’s dissolution also came the end of the sales.

However, things began to change last year. Merchants on Campau expressed an interest in bringing back the sales, and the DDA put together an event. While it was successful, DDA Director Darren Grow says this year’s sale is poised to be even better thanks to the increased exposure from advertising and a more coordinated overall effort by the DDA Board, which Grow largely attributes to behind-the-scenes work done by the Polish Art Center’s Joan Bittner.

“The sidewalk sale is a great way to show what the city has to offer,” says Grow. “The hope is to get a lot of people into Hamtramck who wouldn’t otherwise come here.”