A lesson on what’s art and what’s graffiti 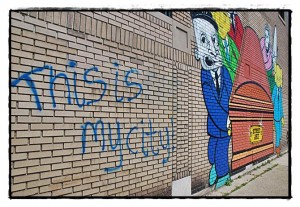 A lesson on the difference between graffiti and street art.

The protest over one of the street murals just ramped up.

Last Friday, Hamtramck police received a call from a man saying two white women were spray painting graffiti next to a recently completed mural on Jos. Campau and Goodson.

By the time police arrived, however, the women had left, and the witness could not identify them from a crowd of people near New Dodge bar, which is next-door to the building that hosts the mural.

The women had painted “This is not my city” next to the mural. (After this was spray-painted, someone erased the word”not.”)

City Councilmember Cathie Gordon, who owns New Dodge, said she was unaware of anyone in her bar being responsible for the graffiti. But, she said, if her employees did it, “I’ll fire them.”

Friedmann is the city official who OK’d several street artists to paint murals throughout town.

The mural came under fire before the paint even dried. Some local folks said it is in poor taste because it depicts six cartoon characters carrying a coffin with “STREET ART” painted on the casket.

Mickey Pokoj started up a petition to have the mural erased and the artist prosecuted. He and other critics say the subjects of a casket and death are “disgusting.”

Some also thought it symbolized Hamtramck as a dead city, which may explain the graffiti that the women painted.

Pokoj said at Tuesday’s city council meeting that he will keep coming back to the council to speak against the mural.

He said he will be a “thorn on someone’s side until that is removed.”

And as for the casket, Pokoj, a local mechanic, said it represents a “vary sacred point in someone’s life.”

The mural controversy has not gone unnoticed in the area. Metro Times writer Michael Jackman has covered the mural development and subsequent controversy.

In his latest blog, Jackman points out that the scrawling of “This is not my city” demonstrates the difference between street art and graffiti.

“How do we know this is graffiti and not street art? First of all, this is illegal,” Jackman said. “It is unsigned. The person who tagged this wall did it under cover of night, unlike the street artists who work cheerfully by day; you can bet your boots the tagger didn’t receive permission to do this. It’s ugly. It will certainly affect the property values of the building. And, finally, unlike the imaginative street art we’ve seen, this graffiti is obviously used by a local to mark territory.”

Friedmann said that if there is overwhelming opposition to the mural, he would agree to remove it.

“But I don’t think there is,” he told The Review. “I think it’s just a few people who are being very vocal.”