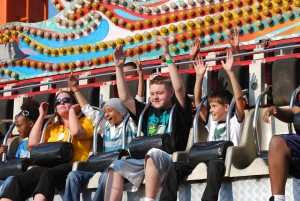 This year’s Hamtramck Labor Day Festival was, with apologies to baseball legend Yogi Berra, like a 1980s déjà vu all over again.

That seemed to be the opinion of many old-timers who remembered when the festival attracted 100,000 or so visitors during the weekend. But since the 1990s, the festival has faded in many ways.

Compare this festival to last year: Back then there were 14 vendors. This year, 50.

But that’s nothing compared to the over-the-top promotional blitz from WXYZ Channel 7, which signed up to co-sponsor the event. Hamtramck’s Special Events Coordinator Eve Doster-Knepp said it took her three weeks to draw up a presentation to win over WXYZ.

As it turned out, the station loved the idea and loved Hamtramck even more. Plugs for the festival were frequently made during the station’s newscasts morning, noon and night for a few weeks running.

Viewing at the live broadcasts from the festival grounds, Hamtramck never looked better.

Even the Polish Day Parade shined this year. The parade drew several thousand onlookers, a noticeable uptick from recent years.

City Manager Bill Cooper said there is a good chance the festival turned a “small profit” – which is a first in many years.

A number of vendors said they, too, did well. Diane Levock, who helped operate a Polish kitchen on the festival grounds, said she served over 100 dinners during the reunion of those who graduated from any Hamtramck high school.

Police Chief Mark Kalinowski said there were no serious incidents of troublemakers. In years past, festivals were marred by roving groups of young people looking for a fight. There have even been occasional shootings.

Kalinowski said officers made sure to break up groups of five or more youths to prevent one group squaring off against another.

On Monday evening, as if by cue, rain started coming down, which allowed the festival to gently close down. Otherwise, summer finally showed up during the weekend. It was sunny and in the 80s – something that happened rarely during the past few months.