A round-up of last weekend … 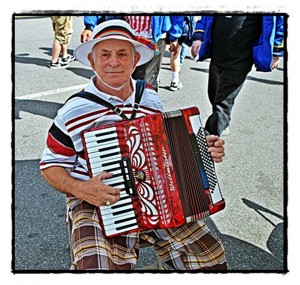 If you weren’t one of the over 200,000 people that attended last weekend’s Labor Day Festival, you can probably read about it at the library in the years to come – it was definitely one for the books.
Despite nearly being canceled earlier this year, the 2010 festival was by all measures a huge success. The music was great, the food was awesome and the overall vibe was nothing but good old-fashioned Hamtramck fun.

It’s impossible to include everything that happened over the three-day affair, but here’s a rundown of the weekend’s highlights:

Though it was new to this year, if you ask anyone who was there they’ll tell you Camptramck was the place to be after the rest of the town shut down. It had the ideal ingredients for a weekend that was hard to forget – or remember for that matter. Throw in some good people, add in a surreal camping atmosphere and the good times literally rolled throughout the campground.

The site was secured around the clock by a combination of Wayne County Sheriffs and GSI security personnel, and a pristinely clean shower trailer was brought in to provide washing and bathroom facilities. And with a complete clean-up by festival organizers the week before, Veterans Park never looked better.

Also new for the year, the Golab-K was a fun run/walk held early in the morning on Labor Day. Put together by members of the Detroit Threads Running Team, the race served the dual purposes of helping to raise money for the festival while adding a new dimension to it.

Runners and walkers were given the opportunity to compete in either a one-and-a-half-mile or three-mile race. Beginning at Veterans Park, the course went down to the festival grounds and back for the shorter race, and down and back again for the longer.

Probably the most exciting addition to the Labor Day Festival was the return of the annual Hamtramck Yacht Race. A competition involving push-carts that look like canoes on wheels, the race pitted patrons of four different businesses against each other in a race down Jos. Campau.

Adding flavor to the festivity, the race was announced by Café 1923’s Sean Kowalski from the top of a lifeguard chair. Once the contest began, it was pure unadulterated madness as the teams from Tight Fittin’ Jean’s, 88th Avenue Bar, the Polish Sea League and Twisted Fix raced toward the finish line as spectators on either side splashed them with buckets of water, shot them with squirt guns and pelted them with balloons.

When it was all said and done, the youthful team from 88th Avenue eked out a close finish over Jean’s in the final race. For their victory, they were awarded a wooden captain’s wheel, which, much like the Stanley Cup, will be inscribed with the bar’s name and given to the winning team until next year’s competition.

It wouldn’t be the Labor Day Festival without the Polish Day Parade, and this year was no exception. A variety of Polish groups participated, as well a number of dance troupes, community organizations and, yes, politicians.

The highlight of the parade was definitely the Detroit Marching Band, which crashed the event much to the delight of both spectators and Hamtramck Mayor Karen Majewski, who danced to the music as the procession made its way down Jos. Campau.

After the festival activities but before it was time for Camptramck, there was only one thing to do – visit 10 of Hamtramck’s finest bars. With transportation provided by the eco-friendly bus The Night Move, taking a trip around town was never as easy as it was on Friday, Saturday and Sunday nights.

Aside from the major new events, options and activities, this year’s festival also had everything it usually does, and then some. For entertainment, Mitch Ryder headlined on Monday night, but not before Danny D rocked the place. And while there also music from bands like the Phantom Shakers, The Harry Perry Band, Howling Diablos, HUSH, The Fresh Tones and more, nobody packed the house – or rather street – like the Polish Muslims, who played before one of the biggest crowds in festival history.

There was also a plethora of food to be eaten, and not just in the Dudek Pierogi Eating Contest in which Matthew Holowickiate defended his title by eating 20 pierogis in three minutes to claim first place. Wally Tripp served up grandma’s favorites at Babcia’s Kitchen while Srodek’s owned it with their killer kielbasa. For anyone not in the mood for Polish food, there was also a number of other offerings from both out-of-town establishments and more local ones like Royal Kabob and Maria’s Comida.

Of course, no festival would be complete without something for the kids (and “grown-ups” who refuse to do so), and this year was no different. The complete carnival midway offered rides, toys and games while an outdoor pool hall, rock wall and mechanical bull gave festival-goers a chance to test their abilities.

And as in years past, the Hamtramck Community Initiative was there with a dunk tank featuring local celebrities like Police Chief Mark Kalinowski and City Councilmember Cathie Gordon. But giving pleasure to more people than anyone – with a line down the block as he mouthed off to over $400 in customers – there wasn’t a single person in Hamtramck who saw more balls fly at their face over the weekend than Whiskey in the Jar bartender August Gitschlag.

All-in-all, this year’s festival proved that a little effort can go a long way in working wonders for the city and boosting its overall standing. The buzz on the street was that it took apart and beat the other area festival, eating it for breakfast and washing everything down with some ice cold Polish beer. But it couldn’t have been done without the commendable effort of a core group of festival organizers, so if you see Konrad Maziarz, Anthony Ciaro, Anna Dinn and especially Kathleen Bittner and Rachel Karpinski Srodek around town, thank them for all the hard work they did over the past few months in putting everything together.

And ask them to do it again in 2011. With a whole year to plan it, it can only get better.