A salute and a toast to Hamtramck’s veterans 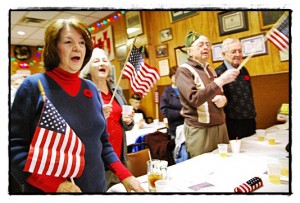 We’re not sure why, but Thursday’s Veterans Day seemed to attract more people than usual here in Hamtramck.

No matter, the Hamtramck Allied Veterans Council knows how to honor our vets and throw an old-fashioned good time Hamtramck party.

Food, drinks, songs, a toast and good cheer. That was the scene and the mood at PLAV Post 10 – the hub of Hamtramck’s veterans posts.

This year’s Veteran of the Year is Raymond Deloof, who served in the Army during the Korean War. Ray used to live in Hamtramck many years ago and is now a Center Line resident. He has been a tireless volunteer here in town. Ray, we indeed salute you.