A sneak peek at development plans for the city 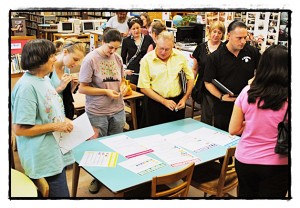 Last Wednesday (July 28) was the final meeting for the city’s Master Plan revision process. But it wasn’t the last chance for residents to give their input.

As part of the nearly year-long effort to draw up a new Master Plan, the team in charge of the revision held their last public outreach meeting at the library to give residents a glimpse at what’s been proposed to gauge which areas are most important to residents.

At the meeting, which was more sparsely attended than those in the past, the discussion was mainly focused on projects that can be completed in the short term. Among them are several improvements to the city’s sidewalk infrastructure that would make the city even more pedestrian friendly as well as alterations to the entryways that make the city more noticeable and inviting.

After the meeting was over, attendees were asked to rank a variety of issues from six categories in the order that they felt was most important. Out of categories that included Quality of Life & the Public Realm, Public Services & Facilities, Transportation, Recreation & Open Spaces, Housing and Cultural & Economic Development, the most pressing issue – according to those who participated – is improving the quality of Hamtramck’s existing parks. Overall, the category of Recreation & Open Spaces was deemed to be in need of the most immediate attention.

Despite the fact that the meeting was the last public opportunity for people to voice their opinions, there still is a chance for residents to speak their minds. Leah Murphy of Interface Studio explained that while this period of a Master Plan revision is typically used to finalize the recommendations of the public, it is not too late to make changes. She says if anyone has any suggestions they can contact the city’s Community and Economic Development Director, Jason Freidmann, and he can relay their concerns to the Master Plan team.

“There is still time,” she said. “But it’s quickly running out.”