A summer of change in the city 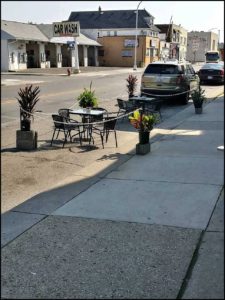 Balkan House recently set up a a sidewalk cafe in a parking space on Caniff Ave. Several other bars and restaurants have recently created sidewalk cafes.

A couple of things are worthy of note from the past few weeks.
First, Hamtramck School Boardmember Maggie Srodek announced last week that she is resigning.
Srodek has served on the board for several years, a number of them as president. She said there are things happening in her life that necessitated her resignation.
She leaves the board with a school district that is solvent, and on the path toward making many improvements.
Her leadership and input into district matters are much appreciated, and she will be sorely missed.
Boardmembers have to put in countless hours in immersing themselves in school matters and issues is a huge undertaking — one that largely goes unnoticed by the public.
It’s not an easy ride being a public servant. Ms. Srodek stepped up to her responsibilities, and then some.
We wish her the best of luck in her future endeavors.
And speaking of the school board, there will likely be two boardmembers not seeking re-election next year, which means this is a chance for new leadership to be groomed in.
A second issue that caught our attention was the easing up by the city in expanding sidewalk café rules. The city is now permitting bars and restaurants to create café areas outside in adjoining parking lots and adjoining alleys.
This is a smart move, and one motivated by the coronavirus pandemic and what is did to these businesses. In short, they had to shut completely down for a few months, which meant there was a huge financial blow to overcome.
Allowing bars and restaurants to expand their outdoor service is an innovative way to allow them to recoup some of these financial losses.
Now that the city took that action, we urge city officials to continue this so-called “pilot program” permanently.
It’s too bad that it took a pandemic to spur something that should have been done years ago.
Posted July 10, 2020