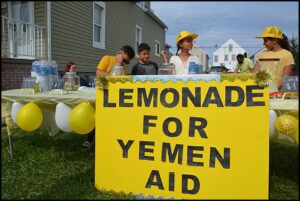 Kids on Doremus St. held a lemonade sale on Saturday to raise money for starving children in war-torn Yemen. They hoped to collect at least $500 but ended up with a little over $1,200.

By Charles Sercombe
Last Saturday was just one of those days where Hamtramck really shines.
Besides being a glorious sunny and warm fall day, there was plenty of activity in the city to embrace.
Toast started off the day spending some time at a lemonade stand on Doremus St., which was being run by several children in the neighborhood.
This was no ordinary lemonade sale. Proceeds from the sale were earmarked to help starving kids in war-torn Yemen.
Noor Alqaifi, who is 12 years old going on being-wiser-beyond her-years, explained she was motivated to hold the sale after seeing photos of the kids.
As a Yemeni-American, she felt their pain.
“I want to feed 50 kids,” she said.
Their goal was to raise at least $500. Well, it seems that word of mouth got out, and there was a steady stream of people who stopped by. We were told the kids raised $1,240.
For the record, Toast had the strawberry lemonade, and it was the best ever. 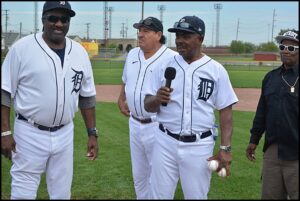 After downing our drink, it was off to the historic Hamtramck Baseball Stadium.
Hamtramck native Ike Blessitt was hosting a Detroit Tigers Fantasy Camp outing featuring Tigers Juan Berenguer and Barbaro Garbey from the legendary 1984 World Series championship team. They were on hand to coach, mingle and have fun.
And fun it was.
For sure, it was a perfect baseball day: sunny and warm temps.
Or did we already mention how great the weather was? Cause it truly was stunning.
Starting off the game was one of Detroit’s best singers, Robert Bradley, who simply poured out his soul to everyone. It was goosebumps-on-your-arm good.
We chummed it up with Barbaro, talking baseball. Asked what he thought about today’s game, he took a moment to choose his words (because he still has a hand in coaching, and whatnot).
“It’s different,” he said, pointedly.
OK, so how?
Well, players, he said, are bigger today, stronger, and faster and they throw harder. As for pitching, today, it’s normal, he said, to throw 93-95 miles per hour. Way back when, 90 mph was considered wickedly fast. Now, that’s like serving up a lob.
Despite all that, we asked: Do you miss it?
“Everyone does,” Garbey said.
You know what Toast misses? The old Tiger Stadium. But that was many baseball beers and peanuts ago. (Al, our proofreader and feature writer, keeps telling Toast to “God, give it up” about yammering on and on over the loss of Tiger Stadium.)
But back to Saturday, here’s what the Hamtramck Stadium Grounds Crew had to say about that day on their Facebook page:
“We’re not sure who won yesterday’s Fantasy Camp Alumni Game at Turkey Stearnes Field, but we do know that everyone had a great time.
“Thank you to Hamtramck native and former Detroit Tiger Ike Blessitt for organizing this wonderful event.
“And thanks to Ike’s friends and 1984 World Champions Juan Berenguer and Barbaro Garbey for participating. We all enjoyed a special singing performance by the one and only Robert Bradley.
“Ike, let’s do it again next year!”
Also watching the game that day was retired Hamtramck Public Schools Superintendent Tom Niczay, who’s a huge baseball fan just like Toast.
Tom – along with many others – has been active in the renovation of the ballpark, and he just got back from visiting Pittsburgh where he caught a Pirates game.
Hamtramck’s stadium grandstand is currently under reconstruction, and by next spring folks should be able to sit up there and watch the games.
It’s going to be good.
Moving on to later in the day, Toast and friends piled into the newly renovated Polonia Restaurant, which we’ll admit up front is now owned by Review Publisher John Ulaj.
If you haven’t been here lately, you might be in for a shock. The interior has been completely redone; it’s now way more spacious, and the seating is actually comfortable.
Say goodbye to those old hardwood chairs with no cushioning.
It’s a new vibe but wow, the food is still home-cooking good, and the prices and portions can’t be beat.
Now that’s a well-rounded day.
When it comes to good food and great times, Hamtramck has plenty to offer. In this column, we’ll talk about what’s happening at our bars, restaurants, and at other events throughout the city.
Posted Oct. 8, 2021