A tale of two cities continues to grow for city officials 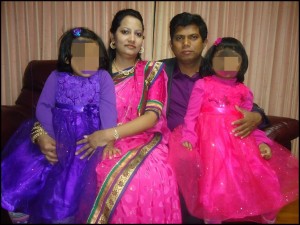 City Councilmember Abu Ahmed Musa poses with his wife, Jaheda, and their children. Musa says he lives in Hamtramck while his wife lives in Warren. Photo taken from Jaheda Ahmed’s Facebook page.

By Charles Sercombe
In an ongoing investigation, The Review has found another instance of a school board candidate and also an elected official leading dual lives in two cities.
Last week we reported that school board candidates Mohammad Huda and Nasir Sabuj own houses in Warren where they claim a 100-percent Homestead tax exemption while also claiming to live in Hamtramck.
In order to receive a Homestead exemption one must own and occupy the dwelling.
This week, we discovered through property records in Warren and Hamtramck, as well as voter records, City Councilmember Abu Ahmed Musa’s wife, Jaheda Ruzi Ahmed, owns two houses in Warren, with one receiving a 100-percent Homestead tax exemption.
But Musa, who is serving his first term, which he won in the 2013 election, owns a home at 11623 Gallagher in Hamtramck where he receives a 100-percent Homestead tax exemption. According to his voter registration record this is where he lives.
On Tuesday Musa was outside the Hamtramck Community Center where voting was taking place. A Review reporter caught up with him and asked him about the arrangement and whether he had separated from his wife.
Musa confirmed his wife owned theWarren houses, but said he couldn’t talk because he had a phone call. While walking away, though, he said: “Why would we be separated?”
Musa and his wife have two daughters. His wife’s Facebook page makes no mention of her relationship with him, but there is a photo of the two with their daughters.
Musa’s voting registration record shows a curious path from Hamtramck to Warren and back again to Hamtramck.
He first registered to vote in Hamtramck in 2011 while living on Trowbridge, and then a little over a year later he moved to a house his wife owns in Warren at 28880 Audrey Ave.
That was in August of 2012, but then a month later, Musa came back to Hamtramck and re-registered to his former residence on Trowbridge, according to his voter registration record.
In March of 2013 he moved to a house on Moran and then in December of that year to his present address on Gallagher. A few months ago The Review visited the house and a woman who identified herself as Musa’s niece said he lived there.
In Warren, Musa’s wife has a Homestead exemption for her house at 28846 Grobbel Ave. She tried to get a Homestead exemption for her house at 28880 Audrey Ave., also in Warren, but was denied because she already had one for her house on Grobbel.
Musa is not the first elected official to claim residency in Hamtramck while their spouse lives in another city. 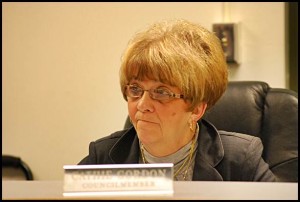 Former City Councilmember Cathie Gordon set a precedent in 2007 where a Hamtramck official claims to be a resident while their spouse lives in another city.

You could say that back in 2007 former Councilmember Cathie Gordon set the precedent. At that time Gordon announced she was running for a seat on city council and would move out of her house in Sterling Heights. She said she was leaving her husband Lewis Gordon there while she lives with her mother in Hamtramck.
Gordon said she and her husband were not separating or divorcing.
While some in the city questioned whether she truly would make Hamtramck her home, she was elected to office. But a year later, her residency once again became a matter of debate.
In an interview with a television reporter about what effect the possible closing of GM’s Poletown plant would have on the city, Gordon said she would be forced to sell her Sterling Heights home and move into her bar, the New Dodge Lounge.
Some on the council seized on that comment, saying it was proof positive that Gordon was not a resident and thus subject to being kicked out of office.
Gordon insisted she was being “sarcastic,” but the council found the comment warranted an investigation into her residency.
It was discovered that her name was not only on the deed to the Sterling Heights home, but she was also claiming a Homestead exemption.
After the city’s legal bills accumulated to $50,000, the council abandoned its inquiry into Gordon’s residency because the investigation was getting too expensive.
“It’s in the best interest of the city,” said then-Councilmember Alan Shulgon. “We have to move on beyond this.”
But what investigators discovered during the inquiry was that Gordon frequently went to her Sterling Heights home, even after closing her bar, New Dodge Lounge, late at night.
Although Gordon is still on the deed for the Sterling Heights house, she agreed to remove her name from the Homestead exemption in 2010 in her settlement with the council following the inquiry.
She shrugged off the accusation at the time, saying: “Things got blown out of proportion.”
Gordon decided not to run for re-election to council last year and instead challenged Mayor Karen Majewski. She finished at the bottom of the ballot in fourth place.
Gordon was also a candidate for school board in Tuesday’s election. She lost out there as well, finishing in second place for a partial term with four years remaining.