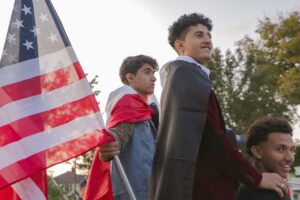 By Alan Madlane
Justin Feltman and Razi Jafri have a short film streaming right now, all about the last big general election held here in the city for mayor, city council and so forth.
We emailed some questions through their public relations firm of Cheryl Duncan.
Here are their responses.

The Review: So let’s start with this: How does Razi know Justin? How does Justin know Razi?
Justin Feltman: We met during the 2016 election.
I came to Michigan to work on a project based around underrepresented voices in American democracy. I met Razi in his role as an activist around Metro Detroit, and he introduced me to many community leaders. We got along really well, and formed a great working relationship.
It didn’t take long before we started talking about making our own film.

The Review: What made you decide to put together this film about Hamtramck?
Razi Jafri: Election night, 2016. Justin and I watched at the Arab American National Museum as the results came in.
It kind of left us all with the thought, “What do we do now?” We threw around a few ideas, but as soon as we discussed making a documentary about Hamtramck, following an election after a national one so filled with Islamophobia and xenophobia — the discussion ended, and the work began.

The Review: How many hours of footage did you first end up with? Also — it sounds like the editing process was difficult? Was it just the sheer amount of footage that you had to go through?
RJ and JF: I couldn’t tell you an exact figure, hours-wise, but we’ve got almost seven terabytes worth of footage. Hamtramck is just such an easy city to shoot; there’s always so much going on, and we wanted to shoot it all.
It was a tough process going through all of our footage, and creating a coherent narrative, while still including so much about the vibrant celebrations and daily life that draw so many to this city.
We couldn’t have brought it all together if it wasn’t for our editor Luther Clement-Lam, and our entire post-production team.

The Review: It appears that some of the more controversial bits were eventually left out during the editing process, for example, some of the more intense city council parts where there was loud arguing.
Has anyone accused you of “white-washing” the film in order to make Hamtramck seem more idyllic, or “less scary,” or what-not?
RJ and JF: We talk a lot about how we have footage for about 15 short films, beyond the one that (has been) released.
There are so many stories you can tell about this city, but we focused on the election itself more than city hall.
We found the campaigning, going door to door, connecting with residents on a person-to-person basis really special. You can’t win without connecting with every community in this city.
We believe it’s important to see a place like Hamtramck — and those hoping to represent its many communities — on screen, working together, and exploring what a representative democracy looks like.

The Review: How did the film come to find its way onto WORLD channel (formerly PBS WORLD)?
RJ and JF: We conducted a few test screenings and work-in-progress screenings once the edit started coming together. We were fortunate enough to be able to conduct one in Brooklyn with American Documentary, the organization that produces POV and America Reframed.
We always knew we wanted to end up on public television, so once the film was completed, we reconnected with them and were able to submit it for their consideration, and they decided that America Reframed on WORLD Channel would be the perfect fit for the film.

The Review: How has the film been received overall? What else is happening with it at this point?
RJ and JF: It’s been a hectic process, going from SXSW’s cancellation last March to ending up with a national broadcast this year, but it’s been a great experience.
The reception has been quite warm. We have gotten strong reviews, and have conducted a series of educational impact screenings around the country and have plenty more upcoming. Beyond the national broadcast with WORLD Channel, we are also going to be released digitally with Grasshopper Film later this year.

The Review: Any plans for a follow-up, or if not, will you work together again on another project of a different type?
RJ and JF: We aren’t planning any sequels for Hamtramck with this mayoral election. Content to watch this one from afar, but we are definitely fascinated to see how it goes.
We do have a grant from Doha Debates which helped us create an educational curriculum around the film and epilogues, following up with our main candidates, which we will be releasing soon.

The Review: Add anything else that you’d like to add?
RJ and JF: Just wanted to say “Thank you, Hamtramck!”
Throughout the production, Hamtramckans were generous with their time, and opened their lives, businesses, and homes to us.
We also had many collaborators from Hamtramck, including Petter Dahlgren, one of our camera operators; and our very talented composer Colleen Burke, who wrote and produced the score for the film.
We couldn’t have imagined a more generous community as we made our first film. We hope we have made this city proud!

“Hamtramck, USA” by Razi Jafri and Justin Feltman is available to stream for free at worldchannel.org and on the PBS app.
Posted July 9, 2021

One Response to A talk with ‘Hamtramck, USA’ documentary makers