A toast to the city’s early morning bars 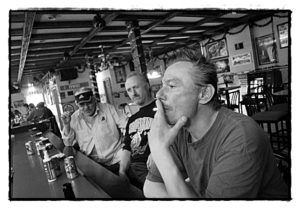 The era of early morning bars is a thing of the past in Hamtramck, and, yes, so is smoking in bars.

When it comes to good food and great times, Hamtramck has plenty to offer. In this column, we’ll talk about what’s happening at our bars, restaurants and other events throughout the city.

By Charles Sercombe
It’s a slow Tuesday morning, and a friend sends a Facebook message here to The Review, wondering if there are still any “geezer” bars that open early in Hamtramck.
And when we say “geezer,” let it be known that Toast of the Town is now officially of “geezer” age — so no disrespect intended.
Seems this friend had a hankering for a cold draft – as in one where you could sit and chit-chat with the morning crowd.
The short answer: Doesn’t look like it anymore, except for the Motor City Sports Bar on Jos. Campau on the southend, which opens at 10 a.m. and which also serves up one of the best hamburgers in the area.
That got us to thinking about the old days, as well as the not-that-long-ago days.
Back in the 1990s there were still a half dozen or so bars that opened around 7 a.m.
Where have they all gone?
Mostly, as the city’s “geezer” drinking generation died off in that decade and new immigrants moved in – many of whom do not partake in alcohol and the bar scene – those bars closed up, one-by-one.
Some were torn down. Some burned down. And some were converted into markets.
Change came fast but strangely it was hardly noticed.
Hamtramck was crazy famous as a hard-drinkin’ town. At one time, this tiny city of 2 square miles boasted being home to about 200 bars. It was the most bars per capita of any American city, they said.
There was nearly – literally – a bar on every neighborhood corner, if you count the service clubs as well.
Local historian and author, Greg Kowalski, says the exact number remains elusive, though.
“No one knows for sure. After Prohibition, all kinds of places opened up. It got to the point that the city officials stopped issuing liquor licenses, because even they couldn’t keep track of them,” Kowalski told us in an email.
“Plus, it got into a tangled mess as licenses were spread among bars, liquor stores, restaurants that sold liquor, private clubs, and stores that sold liquor. If you took all those licenses, it was about 300. Maybe 200 were bars.”
You can read more about Hamtramck’s incredible bar scene throughout the decades in Greg’s “They Drank to That: Bars, Beer and the Beat of Hamtramck.”
Greg has a dozen or so books about Hamtramck out, which many of them can be bought at the Hamtramck Historical Museum (located at 9525 Jos. Campau).
Trust us, all of them are fun reads.
There is still a thriving bar scene in Hamtramck, but many of the bars don’t open until afternoon; and others not until evening.
The scene has also changed quite a bit. Back when, many of the bars here were on the rough side. But there were a few mellower bars. And there were some nightclubs that offered live music.
It was back in the late 1970s and early 1980s when the rock and roll kids took over a handful of bars – most notable Lili’s 21 Club, which still survives as a rock bar but is now called The Painted Lady.
Some of the more notorious bars included Adam’s Corner Bar at Caniff and Lumpkin, and, across the street, Tardie’s.
Those were strictly for locals, though, and outsiders could very fast find themselves in a tense face-to-face situation.
My memory of Adams, which was torn down to make room for the expansion of Caniff Electric, was that you could see some of the town’s movers and shakers – major business owners and certain high-profile politicians – stumbling out of there around 7 or 8 in the morning.
The place was notorious for fencing stolen goods and for being a place where you could place bets on horses — or whatever. I often wondered if the bar ever officially shut down after the official closing hour, or if they just locked the door, turned off the lights and let everyone continue drinking until dawn.
For some neighbors, the bar was a nuisance, and cops were often called there to settle things down. Sometimes, guns were drawn.
There was another thing that always caught my attention when driving into work at the old Citizen newspaper office. Adam’s had a an incongruously flowery sign out front that said “Think Spring.”
During the darkest and coldest part of winter, that sign always gave me encouragement and hope that, yes, spring would soon be here.
The memory of all the old bars in town that used to open early was mentioned by Toast on the Facebook page called “Hamtramck Memories – Back in the Day.”
The memories came flooding back for many.
Some of the old bars remembered included: The Norwalk (one of my favorites, where “Fast Eddie” served up 75-cent drafts of Beck’s dark beer); the Blue Goose, the Blue Jay, Head Coach (which may have been the last bar to open early), Opokas, the Congor, P&L’s, J&S, Club 77, Hank’s (which is now Bumbo’s), the Port, the All American, the Senate, Macey’s and on and on.
Those are a lot of memories, and that list barely scratches the surface.
Do yourself a favor, and go get Greg Kowalski’s book on the city’s bars. And then sit down and read it at your own favorite Hamtramck bar one afternoon.
First beer’s on us!