A tradition worth telling and retelling 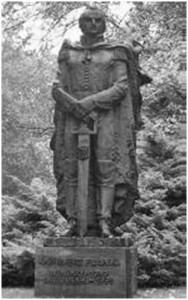 Hamtramck is so rich in cultural amenities that it’s often tough to keep up with it all.

Think about it: where else does the full expression of creative work by visual artists, musicians, designers, promoters and curators bump up against the decades-long community engagement of groups representing the city’s ethnic populations?

Let’s tighten our focus on the latter. Organizations like the Polish-American Central Citizens Committee don’t often make headlines in the local press. And it doesn’t get any play with media looking to Detroit — and Hamtramck, increasingly — for the next innovative step forward in the arts (the best example of this is the transformation of the neighborhood just north of the city and south of Davison, where the Power House project and San Francisco’s Juxtapoz magazine have combined on an otherworldly re-design of several abandoned houses).

Groups like Central Citizens provide a real backbone for community life to thrive. They have been doing it for a whopping 96 years (yes, you read that right), and have been holding an annual testimonial banquet for the last 38 years. The banquet honors the memory of Kazimierz Pulaski, dubbed the “Father of the American Cavalry” for his leadership and heroism during the Revolutionary War.

In his short, brilliant military career Pulaski saved the life of then-General George Washington during the Battle of Brandywine (1777) and fought alongside General “Mad” Anthony Wayne at another battle that defeated the British in Haddonfield, New Jersey.
Pulaski died of wounds suffered during the Battle of Savannah in 1779. He was 34 at the time of his death and has been honored with tributes, observations, parades and statues across the U.S. for over 200 years. In 2009, Pulaski was granted honorary citizenship by the U.S. Congress — only one of seven people to receive the designation.
So it’s no small accomplishment to be duly noted by the Central Citizens Committee membership for good works and deeds in the community. They do it every year in the name of the memory of the patriotic spirit of Gen. Pulaski.
Last Sunday, the group held its banquet at the Polish National Alliance Hall on Conant and honored Don Horkey, Greg Kowalski, Laurie Gomulka, George Lukowski, Terry Manning, Fr. James Mazurek, Eugene Oleszko, Fr. Roman Pasieczny and Michael Wilk.
The group also honored the Detroit Tigers organization as a “Friend of Polonia” for its support of the Polish-American community. The Tigers have featured a Polish-American Night first at Tiger Stadium and now at Comerica Park, for 40 years.
The event is all about dedication to tradition and community. It’s a good story that needs telling and retelling, not to mention looking forward to the Central Citizens’ upcoming 100-year anniversary. Now that’s rich.