A year later, county health center has overcome many challenges 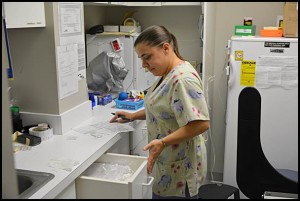 The Wayne County Health Center in Hamtramck has been attracting an increasing number of patients.

By Charles Sercombe
When the Wayne County Hamtramck Health Center opened a little over a year ago, organizers had no idea what challenges they would face.
The biggest one, said Marva Hairston , Chief Executive Officer of the county’s Jos. Campau center, has been the tremendous language barrier.
“We can have signs for basic hygiene,” said Hairston, “but what good does that do for someone who doesn’t speak English?”
By Hairston’s count, there are nine language dialects spoken in this area. One way to solve the language barrier was to install phones in each examination room so staff members could call for translation help.
Other obstacles also include cultural ones. For some Middle Eastern women, they are not used to all the touching nurses and doctors do during routine check-ups.
“The medical practices are different in their home countries,” Hairston said.
But staffmembers at the center have been making big strides in breaking down cultural and language barriers.
“You have to do so much to make them (patients) feel comfortable,” Hairston said.
Now that thousands of people in the area have signed up with the Affordable Care Act, the center has been humming with activity. On average there are 150 patients per month.
But include the number of people asking about insurance coverage, and other programs, that number easily doubles. The demand has occasionally required the clinic to extend hours into the weekend.
Part of that increase of patients also comes from the center expanding its services. Since opening, the center has included doctors specializing in obstetrics and gynecology (OB/GYN), infectious diseases and pediatrics.
The Women, Infants, and Children (WIC) program has also doubled in size.
While the county is looking at ways to keep federal funding flowing after the two-year grant runs out, another financial helping hand has stepped up.
The center was recently awarded $20,000 from the Wayne County Four Star Health organization, which is the county’s partnership with the area’s four major health systems – Henry Ford Health System, Detroit Medical Center (Vanguard), St. John Providence Health and Oakland Healthcare System.
For those who are still uninsured, which includes many immigrants, fees at the Hamtramck Center are based on what patients can afford.
Appointments can be made and walk-ins are also welcomed. To make an appointment, or for more information, call (313) 365-1362. Hours of operation are Monday through Friday, 9 a.m. to 5:30 p.m. Wednesday’s hours are 11 a.m. to 7:30 p.m.
The clinic is located at 11447 Jos. Campau.