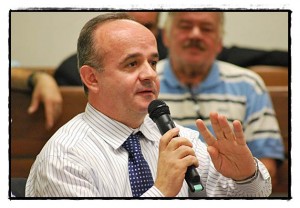 As he promised, Acting City Manager Nevrus Nazarko stepped down from his position as acting city manager.

He had told the city council he was resigning immediately last week, but he agreed to stay on until this past Tuesday’s council meeting.

Nevrus said he needed to concentrate on his primary role as finance director.

The announcement came as a surprise to councilmembers, and it left them with little time to come up with a replacement.

But they all agreed to hire Nazarko’s assistant, Kyle Tertzaj, is a former Allen Park City Councilmember and former City Administrator for Woodhaven.

Nazarko had been holding the extra position of acting city manager for only about a month.

While he cited a heavy workload as the reason for his resignation, insiders say it had more to do with some councilmembers becoming harshly critical of Nazarko.

The council has been rough on city managers lately. They abruptly fired City Manager Bill Cooper last March. After Cooper they hired former director of economic development Erik Tungate in April, but then forced him out in July.

Councilmembers are wrestling with finding a new permanent city manager while at the same they are dealing with a major financial crisis. Unless the state agrees to give the city an emergency loan, it will run out of money in a matter of weeks.

But Nazarko did come up with a budget deficit plan that the council hopes the state will accept and then agree to loan the city $2 or $3 million to help end the financial crisis.

It’s not clear how long the council plans to keep Tertzaj on the job while a permanent city manager is sought.