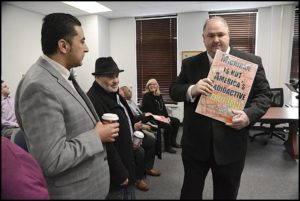 State Rep. Isaac Robinson held a press conference on Monday at city hall to draw attention to two House bills he has submitted that would ban radioactive waste from being recycled at a local plant.

By Charles Sercombe
Last year at this time, state Rep. Isaac Robinson introduced two bills that would ban a recycling center from accepting radioactive waste.
Those house bills, HB4808 and HB4809, are still sitting in a committee with no promise as to when – or if – they will ever see the light of day.
On Monday, Robinson held a press conference in Hamtramck City Hall to bring attention to the stalled bills – and hopefully to ward off any sneaky bills from being passed through the state legislature, that might allow more toxins to be dumped off at Michigan recycling centers.
A few years ago, US Ecology, which is located a mile east of Hamtramck, won state approval to expand its facility, and also to allow hundreds of thousands of gallons of fracking waste to be stored at its site.
Robinson said it’s a disaster waiting to happen.
“We know what happened in Flint,” he said. “We must take radioactive waste seriously.”
Michigan has over 1,000 recycling centers that accept this kind of waste – more than most states. For a state that has a prominent promotion called “Pure Michigan,” it sends a mixed message.
“Do we want our state to be known as a dumping ground, or known for our great lakes?” Robinson said.
Several states are already taking advantage of Michigan’s open toxic waste policy, and transporting their waste here.
City Manager Kathy Angerer was joined by several community leaders who expressed outrage over the practice.
“Being America’s dumping ground means we are cheap,” Angerer said. “It’s not right to take waste from other states.”
Sharon Buttry, a Hamtramck resident who has been leading the charge against US Ecology, echoed Robinson’s complaint that his bills are being ignored.
“We need hearings,” she said. “We need that process to move forward.”
Now that there is a new governor, Gretchen Whitmer, who is also a Democrat like Robinson, there has been positive feedback, Robinson said.
He said the governor’s legal team is “aware” of his pending bills, but also that there has been no firm commitment yet to help move them forward.
One formidable problem, Robinson conceded, is that US Ecology has lobbyists working on legislators – which usually translates into campaign donations.
But what may financially benefit some easily influenced legislators doesn’t trickle down to homeowners.
Wayne County Treasurer Eric Sabree pointed out that property owners near this recycling center will lose out, because property values will decline.
“Who wants to live next to a radioactive dump?” he said.
In the meantime, US Ecology is opening another recycling center near Hamtramck, near the former Detroit incinerator.
Dec. 20, 2019

3 Responses to Activists call for action