After 23 years, Zen Center is still attracting thousands of visitors 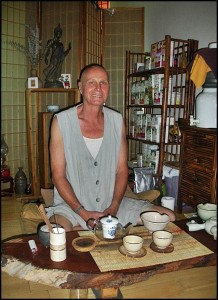 Hwalson Sunim is the abbot of the Detroit Zen Center, which is located in Hamtramck at Casmere and Mitchell streets.

Tucked away in one of the city’s many tightly-knit neighborhoods is an amazing site.

At the corner of Casmere and Mitchell, sits an unimposing building with a large golden-colored Buddha sitting on top.

It’s where East meets West, and thousands of visitors have come to this juncture since the Detroit Zen Center first opened in 1990.

The center’s website says it was established “to provide a place for the study and practice of Zen Buddhism through meditation, manual work, the arts, and to build a self-sufficient, sustainable community within an urban setting.”

The abbot of the Zen Center, Hwalson Sunim, initially trained for a decade with a Buddhist monk in Toronto before visiting Korea, where he was ordained 40 years ago. After the completion of training in Korea, Sunim returned to the states to teach Americans.

Sunim first started out teaching sports sociology at a university in Canada. He said although he appeared to have everything people desired, he was still dissatisfied with life.

“From the outside, you’d say, ‘Well, he’s done pretty well for himself,’ (but) the inside wasn’t right,” Sunim said. “If your inside and outside are not lined up, and you recognize that, which I did, you’d say, ‘Well, what have I got to do about that?’”

His frustrations with life led him to search for spiritual and self-help books, and eventually he met a monk who invited him to meditate.

“We didn’t know what it was, but we’d all heard about meditation. So I thought, ‘it’s about time I found out,’” Sunim said. “And I ended up staying with him for 10 years.”

“Zen is the most direct way to enlightenment,” Sunim said.

The Zen Center allows those searching for spiritual guidance to get immersed in meditation. Sunim believes that the service he is providing in Hamtramck is what people can expect to receive from a monastery in Korea.

Jiwohl Jessica Madden, a resident of Hamtramck, became a student at the Zen Center in 1999 after meeting Sunim and attending a ceremony the organization hosted.

“Sunim gave a talk and when I heard what he had to say, it kind of hit right home. And I thought, ‘Wow, this is a place to come and learn,’” Madden said.

The center offers classes and retreats for interested individuals. The latter exists four to five times a year and lasts between three days to a week.

“During retreats we practice meditation. In the meditation hall, we sleep over and we do work, such as cooking and cleaning around. Most of it is in silence,” Madden said.

Madden says the organization’s aim is to teach participants “how to quiet their mind so they know how to help those around them.” One of the most important concepts she learned from the center was “approaching life in a way that can make the most potential as a human being.”

“We’re constantly going about our life in this way; ‘Oh I like that, I don’t like that,’ rather than being fully settled. … The practice of meditation is to concentrate so that you can be fully aware of what’s in front of you,” she said.

“I’ve helped them learn how to help themselves. This is about us having individual accountability,” Sunim said.

During meditation, students wear gray jackets. Madden explains that the reason for the lack of color in the outfits is to ensure that participants will be focused inward, rather than being distracted by colors or clothing.

The center also offers yoga classes on Thursdays at 4:30 p.m. and Saturdays at 9:30 a.m. Instructors are from the Ferndale Yoga Center and the fee for one class is $12 or $8 for a group of six classes.

While many live off-site, residential opportunities are available for interested students.

Madden said members participate in “basic practices of living” where they garden, clean the center and assist the business the organization runs.

Participants make various foods, such as kale salads and chips, dehydrated pumpkin seeds and granola, and sell them at several markets, such as Holiday Market in Royal Oak and Western Market in Ferndale. The funds earned from this activity, as well as donations from members, contribute toward the Zen Center’s expenses.

Another method the non-profit organization used to help fund the center was through a café that closed approximately three years ago because it was “a lot of work,” according to Madden.

But due to a high demand from the community, the café is reopening on Saturday, Sept. 28.

For those interested in learning more about Zen, services are available on the first and third Sunday of each month.

“Anybody who wants to practice here, the doors are open,” Madden said.

To learn more or participate in the activities the Detroit Zen Center has to offer, visit their website at www.DetroitZenCenter.org.