After 94 years, St. Lad’s will be forced to close its doors. Update: the church did not close 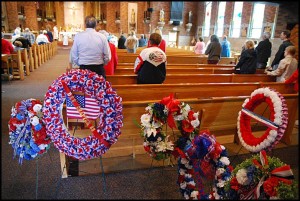 St. Lad’s parishioners will soon have to find a new church in Hamtramck to attend. The Detroit Archdiocese is planning to close the church, leaving just two Catholic churches left in Hamtramck.

By Charles Sercombe
It’s been a long time coming for St. Ladislaus Church.
During the past 20 years the city’s Catholic population has rapidly declined, and the city’s three Catholic parishes were forced to tighten their financial belts.
Several years ago St. Lad’s merged with two other Detroit-area parishes and cut services down to twice on the weekend.
This past weekend it was announced that the Detroit Archdiocese is closing St. Lad’s, as it is affectionately known.
Fr. Andrew Wesley said the closing came down to the finances of keeping St. Lad’s open along with the two other churches it was clustered with, known as the St. John Paul II Parish.
“All of these building cost too much to keep open,” said Wesley, who is the pastor for the Parish.
Also closing down is St. Louis the King Church. That means only Transfiguration Church will remain open out of the three.
Wesley said there is no closing date yet, but it will happen within a month or two.
St. Lad’s is celebrating its 94th anniversary. The current church was built in 1952. Before that, parishioners worshipped above a former Cunningham Drug Store at Caniff and Jos. Campau, then moved into a church on Brombach and Caniff and then finally to its current location.
Wesley said there are about 150-200 parishioners. He said he expects many will turn to Our Lady Queen of Apostles or St. Florian, one of the largest Catholic churches in the area.
Like the other two Catholic churches in town, St. Lad’s once operated a school system, but that shut down decades ago. The school building has since been purchased by a charter school that caters to the city’s Bengali community.
Wesley said the church will be sold, but there is no sale price determined yet.
Frank Zacharias has been an usher at the church for 50 years, and has been a member of the parish all his life.
He took the news of the closing in stride.
“It’s a sad but something had to be done,” Zacharias said. “We were waiting for the bomb to drop.”
Zacharias said that the decline in the parish started with the closing of its elementary and high schools, then parish clubs, and finally when parish members moved out or died and their children did not take their place.
“Hamtramck once had 50,000 people, now it’s 22,000,” he said. “When you had 50,000 living here three churches were viable.”
Although the number of parishioners in many inner-city churches has gone down, Mayor Karen Majewski said the Archdiocese destabilized the parishes by reassigning longtime priests to suburban churches.
There have been other moves by the Archdiocese, Majewski said, that all add up to a “disinvestment to churches south of 8 Mile.”
She also predicted that Transfiguration Church will struggle to survive because St. Lad’s parishioners will stay in Hamtramck.
“Transfiguration is the least viable out of the three,” she said.

26 Responses to After 94 years, St. Lad’s will be forced to close its doors. Update: the church did not close