After decades of waiting, city can now sell lots 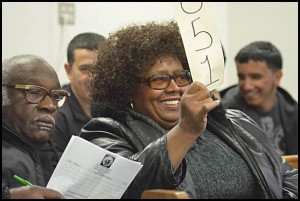 A happy bidder wins a city-owned lot at last week’s auction in city hall. The city can now sell off its lots after finally settling a decades-old housing lawsuit. The city hopes to collect $200,000 from the sale of 275 lots in the coming months.

They both purchased city lots at last week’s auction in city hall and plan to build houses on them to rent out.

“I try to build up the city, make it beautiful,” said Huq when asked what he planned to do with his newly purchased lot on Denton St.

That’s exactly what Kathy Angerer, the city’s Director of Community & Economic Development, hoped will happen with the eventual disposal of 275 city-owned lots.

“The goal of the auction is to return the property to private ownership,” she said. “We hope it will instantly bring in revenue.”
The lots had been on hold for decades until the city settled a housing discrimination lawsuit that originated back in the 1960s. It took years to figure out a way to finance the construction of over 200 housing units to satisfy the housing settlement.

This past spring, the city finally hit that milestone, and thus freed up the city lots leftover from the building boom.

Last Thursday’s auction attracted about 30 would-be buyers. The highlight of the day was a bidding war between Kowalski Sausage Co. and the Hamtown Farms organization. 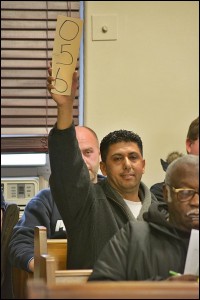 Kowalski wanted to purchase the parcels where the Farms project is located, which is next-door to the sausage company. Mike Kowalski represented his family’s business, but he succeeded in winning only one parcel at a cost of $11,000.

It’s not clear what he plans to do with his parcel, but on Monday he paid for the lots that abut the Farms project.

Thanks mostly to that bidding war, the city raked in a total of $49,400. It is hoped that the sale of city lots will bring in $200,000. This was the first of seven auctions to come. The next auction will be sometime in December.

It took about two hours to go through a list of nearly 60 lots, with Angerer frequently goading on the bidders. When a number of lots on Danforth St. went without interest from bidders, Angerer cracked: “Come on, we don’t want to make Danforth feel bad.”

Interestingly, a long stretch of connected lots on Grayling St. were ignored.

Lots that did not sell will eventually be included in one last auction. The minimum price for a lot is a mere $250, but it’s also buyer beware. Successful bidders will have to deal with any property taxes and water bills owed the city, and also deal with potential blight.

One Response to After decades of waiting, city can now sell lots