After years of non-use, Jos. Campau flagpoles come to life 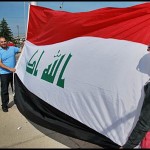 On Saturday at 4 p.m. the Hamtramck Human Relations Commission will raise the international flags representing the many ethnic communities who live in Hamtramck. 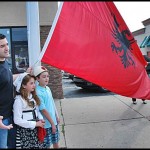 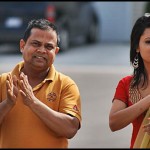 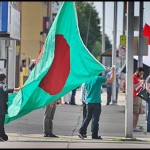 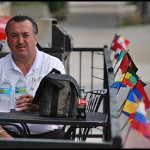 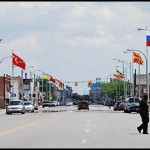 The social fabric of Hamtramck is woven with threads of rich hues and colorful strands, braided together to create a vibrant heritage — more pronounced than in any other community in Michigan.

Besides two American flags, the flags represented  countries whose populations have adopted Hamtramck as their hometown.  Two people from each nationality represented were on hand to do the honors of raising their flag.

Many representatives dressed in the traditional garments of their native country, making the flag raising ceremony even more colorful.

This event was made possible by the spirited efforts of the Hamtramck Human Relations Commission (HRC).

When Russ Gordon and Ismira Lokmic of the HRC noticed 18 bare flagpoles lining both sides of Jos. Campau, they saw a potential for opportunity to represent Hamtramck’s many nationalities, and the HRC was soon granted approval from the city council to form the Joseph Campau International Flagpole Project.

Two American flags were also purchased and flown, one on each end of the promenade of flags.  Money was also needed to refurbish the flagpoles and make them functional after years of disuse.

Within three months, the HRC reached the majority of its fundraising goal.  Over $14,000 was raised in an intense outreach effort, spearheaded by Gordon and Lokmic.

As Lokmic explained: “The HRC wanted a way to express the diversity of the community, and the proud display of each nation’s flag represented this diversity perfectly.  By reaching out, diplomatically and democratically, to the leaders of the community, we were able to raise the funds within a relatively short period of time.”

These groups view Hamtramck as a model of an immigrant-friendly community. According to the US Census, Hamtramck’s current foreign-born population stands at 41 percent (down from an all time high of 92 percent in 1920).

Welcoming America/Welcoming Michigan promotes the creed: “I reach out my hand to welcome immigrants.  I believe that immigrants bring new energy, new ideas, and a new commitment to a better life that benefits us all.”

Each major donor will have a plaque mounted at the base of the flagpole in recognition for their generosity.  The HRC is still accepting donations for future maintenance of the poles.

Those who wish to reach out their hand to welcome new immigrants should contact: