Ah, the sights of a city festival is always the fun part 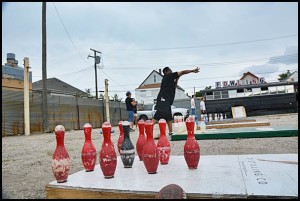 Fowling was introduced to the community this weekend, and from what we can tell, someone drunk invented this “sport.”

By Charles Sercombe
Every Hamtramck Labor Day Festival has its oddities.
This year was no exception.
We were introduced to what will surely be the next drinking man’s – and woman’s – favorite sport: Fowling (which is pronounced FOE-ling).
We’re convinced someone who was a wee bit inspired by spirits invented this simple yet very deceptive game.
Two sets of bowling pins are set up about 25 yards apart and you then throw a football at them to knock them down. The first player to knock all of his pins down wins.
Now here’s the deceptive part. Yes, it looks awfully easy to throw a football at pins, but the dang things are so low to the ground it’s really hard to hit — to hit with a football, that is.
Hamtramck Public Schools one-upped its competition by handing out free gym shoes to adults and kids.
The line for the shoes was never-ending.
Almost lined up face-to-face across Jos. Campau was a booth manned by some kind of a workers’ political party and on the other side their ideological counterparts, the Republican Party, touting Gov. Snyder for re-election and Terry Lynn Land for the Senate seat vacated by Carl Levin.
Oh, if only the two had a throwdown in the middle of Campau.
Not that this was weird or anything, but it struck a strong nostalgic chord for those of us from the old Lili’s bar crowd. On Saturday afternoon there was the one and only Dennis Kiraga playing bass in the power-pop outfit called The Secrets. 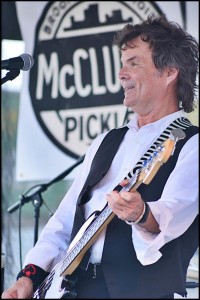 For those of you who know Dennis, he has magically not aged, or as Hamtramck Schools Superintendent Tom Niczay noted: “His hair has not changed.”
Now for something definitely weird, and very illegal.
On Sunday just as the festival was rolling out, someone spread the ashes of their loved one down the middle of a portion of Jos. Campau. The person told onlookers that this festival was the deceased’s favorite event.
We caught a moment when a small girl unwittingly twirled her newly purchased bubble-maker over the ashes: Ewww.