Alley repairs to continue this year 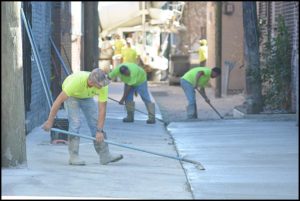 Hamtramck’s finances might be in dire shape but the city is going ahead with an expanded alley repair program this year. File photo

By Charles Sercombe
Although the city’s budget is in deficit spending mode, alley repairs will continue this year.
In fact, a majority of city councilmembers decided to double down on the repairs, and not only restored the budget for the repairs, they increased the expenditure.
Last year, the city earmarked $200,000 for repairs, but this year City Manager Kathy Angerer canceled the program because the city is facing a financial crisis.
The city council decided to override that decision and agreed to expand the program up to $500,000.
The proposal came from Councilmember Mohammed Hassan, who said that the city can dip further into its budget surplus, which the city is already doing to balance this year’s budget.
Councilmember Nayeem Chowdhury also supported Hassan’s proposal, saying that, although the city is in financial trouble, residents “deserve better.”
The alley repairs have included those along the Jos. Campau business strip, as well as others in residential areas.
Most of the city’s alleys have not been repaved since they were first installed decades ago. Many are now cratering or potholed.
For the past few years, the city has been slowly tackling the repairs, taking on several at a time, but only for a block or two for each.
Mayor Karen Majewski supported expanding the program, saying that the repairs are “essential” for businesses because many of the alleys are nearly impassable.
“We are not going to be able to attract customers,” she said.
Majewski owns a clothing store on Jos. Campau called “Tekla Vintage.”
Plus, she said, by not continuing the repairs, the city would lose “momentum.”
“I would hate to see this dissipate,” she said.
City Manager Angerer agreed, fearing that discontinuing the repairs now could end up delaying them “for another 20 years.”
While city revenues are down, Angerer said the budget is adjustable.
“It’s a living, breathing document,” she said.
But some councilmembers had reservations.
Councilmember Ian Perrotta said the proposal seemed to have been prearranged.
“This was clearly thought about prior to this meeting,” Perrotta said.
Councilmember Andrea Karpinski said that, while she’s “all about fixing roads,” she questioned how the city was going to afford this, especially in light of the fact that department heads have had to take a 5 percent pay cut this year.
“Where are we getting this money from?” she asked.
The answer to that, Hassan said, is to take more money out of the city’s budget surplus.
Both Perrotta and Karpinski voted against funding alley repairs.
Both also failed to gain support for their amendment to restore the department heads’ salary cuts, as well as restoring the fire chief’s position from part-time to full-time and reinstate his full salary.
Posted June 19, 2020