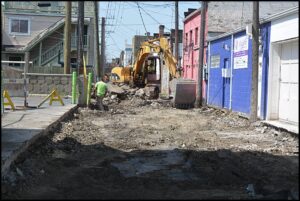 The alley west of Jos. Campau at Holbrook is one of several alleys being repaved this year.

By Charles Sercombe
The reconstruction of Hamtramck Dr. isn’t the only road repair happing this construction season.
Once again, several city alleys will be repaved in the coming months.
Thanks to a $750,000 grant from the Michigan Economic Development Corporation, the following alleys will be torn up and repaved:
• East Jos. Campau — Belmont to Yemans
• West of Conant — Comstock to Holbrook
• North Holbrook — McDougall to Charest
• North Holbrook — Latham to Jos. Campau
• East Conant — Yemans to Evaline
• East Lumpkin — Geimer to Wyandotte
• East Lumpkin — Wyandotte to Hewitt
Two additional alleys were added to this list, with prompting from City Councilmember Mohammed Hassan. There are two connecting alleys jus west of Jos. Campau, running from Caniff northward to Mackay.
That addition will cost over $16,000.
The city’s alley improvement project began several years ago, and has largely been financed by the city budget.
With the city in deficit spending, however, it is unclear if the project can continue in the coming years.
Councilmember Nayeem Chowdhury welcomed the continuation of alleys repairs.
“We’re always trying to improve our city,” Chowdhury said. “This will bring better alleys, and streets, to our community. It’s long overdue.”
Many of Hamtramck’s alleys are decades old, and in some cases may be the original asphalt that was laid down. Those alleys that haven’t yet been repaved are decades-old, and potholed and patched over and over – making some of them resemble moonscapes.
Prior to recent administrations, the thought of repaving alleys was never seriously discussed – for whatever reason. In the meantime, the alleys increasingly became more and more potholed, and required more and more patching.
The neglect of the alleys also mirrored the lack of general infrastructure repairs in past years – thus leading to a perfect storm of collapse – namely, of our streets and sewer lines — throughout the city.
Hamtramckans – and residents in many other older, urban communities — have long been paying the price for the neglect.
For many drivers, the street-wise warning has been: travel down alleys at your own risk. The alleys have also long been taking a pounding by heavy garbage trucks. In some cases, the asphalt collapsed into sink holes.
The new alleys are all being replaced with concrete.
While it’s expensive to maintain the alleys, just remember neighboring Detroit, which surrounds the city, has only dirt alleys.
Yes, Hamtramck has been special for all these years.
Posted May 13, 2022