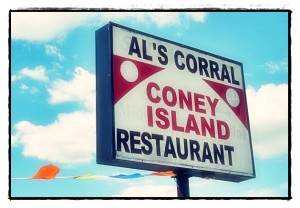 Al's Corral has come back home to Hamtramck.

Everything’s OK down at the Corral.

That’s Al’s Corral, partner, and it’s once again open for business. Has been, in fact, since January of this year.
The site of a number of different restaurant incarnations, especially the original Al’s Corral and the more recent Bengal Masala Café (as well as, at least, one other Indian or Bangla restaurant), it has a sharp new interior and sharp new menus, courtesy of sharp new owner Zef Lulgjuraj.

Hamtramck old-timers might recall the original Al’s Corral, and the man who owned it, Al Cieslak.

Cieslak was one of three Polish Hamtramck restaurateur brothers in the area, whose father set them all up in the business, Lulgjuraj recalls. Al Cieslak got this place, and christened it “Al’s Corral.” Al moved to Las Vegas some years ago, and ended up dying there.

You might well remember Eugene Cieslak’s famed “Genie’s Wienies,” which sat further north on Conant; Gene passed away on Nov. 7, 2006 after an apparently long illness, and that business eventually relocated out on Groesbeck in Fraser, renamed Flashback Burgers now.

Local memory is fuzzier about the third brother – was it Bob? Bill? – and the place he ran, or perhaps still runs.
But, to get us back to the important matter at hand, Zef Lulgjuraj owns Al’s Corral now, and he’s got it looking real nice. He also has close relatives in the local dining business: Nick and Mario Lulgjuraj run Maine Street, the popular eatery up on Jos. Campau.

Zef Lulgjuraj also owned Maine Street, once upon a time (actually, the mid-90s) when he called it United Coney. And, he owned The Clock, from 1997 to 2001.

Here at the new Al’s Corral, he partners with his father-in-law to offer up some wonderful homemade chicken noodle soup, a fine chicken pita, or some tasty wings.

He’s actually had this building since last September. The full-scale renovation took him about four months, and he finally had his official opening this past Jan. 2. It’s a small staff that Lulgjuraj keeps around here, and a multicultural one to boot.

Lulgjuraj, pressed by this writer to recommend some other dishes, emphasizes the chicken pitas, as well as the recently popular “Texas burger” (with green peppers, on Texas toast), the wings, and the corned beef. Told that his chicken noodle soup is good, he modestly agrees, and then also mentions the chili, to which he adds his own recipe of secret spices.

What he needs is more business – down here in the southeast corner of town, on the west side of Conant just north of Holbrook, the look of things is increasingly Bangladeshi, which leaves him a little at odds with his potential closest customer base. It’s empty in here at 3 p.m., although two other tables do get seated by other single men during the course of our conversation.

It’s a shame that it’s not busier, because one thing Hamtramck always can always use more of is a decent restaurant, and this one is definitely more than decent.

A nice guy, and a nice place. Check it out soon.