Ambassador to Bangladesh is the toast of town 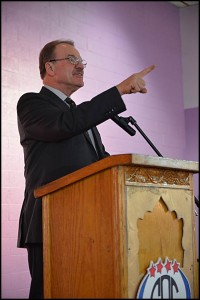 It was a whirlwind weekend for Dan Mozena, the U.S. Ambassador to Bangladesh.

Mozena attended several events in his honor in Hamtramck, all hosted by various political and civic Bangladeshi-American groups. Friday evening a dinner was held at the Gates of Columbus Hall.

Over 100 community members attended to hear what the ambassador had to say about their homeland.

Mozena had some bad news — but mostly good news — about what’s going on in Bangladesh.

First, he denounced the ongoing political violence that has gripped the country in the past several weeks.

Mozena said that the American stance on the situation is that “now, more than ever, violence it not acceptable. … Violence is not part of the democratic process.”

As for the recent tragedies involving garment factories collapsing and killing hundreds of workers, Mozena said there is a movement to get all of the country’s 5,000 garment factories to agree to minimal safety standards and decent labor rights.

Bangladesh, he said, is poised to be the leading manufacturer of ready-made clothing.

“You heard it here first,” Mozena said, “number one.”

Mozena used the word “transform” repeatedly to describe what is going on to boost this industry, which includes help from the U.S., Canada and the UK.

This “transformation,” as he said, will raise Bangladesh to a “middle-income nation.”

Although Mozena was greeted warmly, there was some concern about how Bangladeshis are treated at the U.S. consulate office in Bangladesh.

He said those who live here who wish to contact the consulate have a small window of time to contact the office and it requires them to wait until late at night to make a call.

Helal also said that the process of sponsoring someone to visit America is arduous and that the locals hired to handle the requests are rude and dismissive.