And then there were just two … 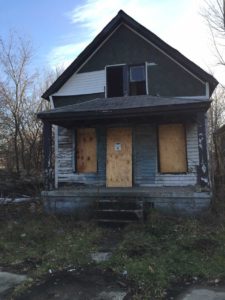 The plan to move a historical log cabin to Hamtramck came to an abrupt end.

By Charles Sercombe
Hamtramck was on the verge of acquiring a major artifact of its history.
But thanks to officials at the Detroit Land Bank Authority, that plan has literally been demolished.
Several weeks ago, there was a buzz around town that the Hamtramck Historical Commission was in line to acquire a log cabin, or to say more accurately, a log house, that had a Hamtramck connection.
Greg Kowalski, the chairman of the Hamtramck Historical Commission, said the difference between a log cabin and log house is that cabins have rounded logs, and log houses have squared off ones.
This was no ordinary log cabin, um, house, because it dated back to the 1800s, possibly as early as the 1830s.
And although it was located just a few blocks north of the Hamtramck-Detroit border, on Halleck, it was Hamtramck’s own.
In the 1800s Hamtramck was a township, and its borders went from this area to the Detroit River.
The plan was to move the cabin to Zussman Park where it would have been restored to its original glory.
Kowalski said a fundraiser was going to be held to raise $60,000 to move and restore it.
But the Land Bank folks apparently grew impatient, and went ahead with their previous plan to raze it – despite earlier assurances to Kowalski it was going to be taken off the demolition list.
People in town are at historic levels of anger. You can say they have “hell fire” in their blood, as they said back in the day, the mid-1800s day that is.

The inside of a historical log cabin that dated back to the 1800s.

“Everybody is furious,” Kowalski said. “It was a shock, especially after all we had done.”
Mayor Karen Majewski took it one step further, and said: “Heads should roll.”
A spokesperson for the Land Bank, an organization that has been mired in controversy lately, said despite claims that there was a plan for the cabin, there really wasn’t one.
The cabin was one of only three such historical structures in Detroit. Now there are two remaining.