Anger erupts over a Nazi flag at a Doremus house 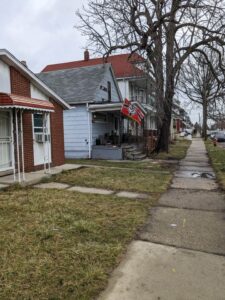 A display of a Nazi flag at a Doremus St. house was a cause of outrage Friday afternoon. The person living at the house said he had been unaware of the flag, and said someone put it up. Photo from Karen Majewski’s Facebook page

By Charles Sercombe
There was outrage Friday over the display of a flag in Hamtramck.
But this time, it wasn’t about a pride flag.
Instead, a house in the 3300 block of Doremus St. was the center of heated discussion because a Nazi flag was being flown on the front porch.
A photo of the house was posted on a few Hamtramck-based Facebook pages, which drew quick attention.
Former Mayor Karen Majewski was leading the charge against the flag saying “I hate Nazis. Especially Michigan Nazis.”
A number of people on her Facebook page suggested that someone should rip it down, or organize a protest at the house, and sparked a debate on the limits of free speech.
“It is one of the only downsides to free speech. Someone has the right to fly it but it should be repulsive to all of us,” said a Facebook poster by the name of MarkMary Sitko
An unidentified poster took it one step further and said no one should display a flag.
“I don’t agree with any flags hanging on any home. Keep your damn private hate or business to yourself!! We don’t need to see what you hate or love!”
It is legal to display the Nazi flag in the U.S. By afternoon, the flag had disappeared.
The Review went to the house in question and a man who identified himself as Joe said he had been unaware that the flag was on his house, and said that someone must have put it up.
“I took that down,” he said.
The man also noted that his ring security camera is not hooked up to the internet, and that he can’t review the recording to identify who hung up the flag.
Local media was also called to report on the matter.
This isn’t the first flap about the display of a flag. A controversy erupted when the pride flag – a symbol of gay and LGBTQ rights — was flown on a city flagpole in Zussman Park. And this past year, a pride flag was displayed on a city flagpole on Jos. Campau, which prompted a call from some to have the flag removed.
But one reader posting on the Facebook page called “Hamtramck Square” took issue with The Review including the pride flag issue.
“It is wild to me that The Review is treating ‘Pride flag’ and ‘neo-Nazi flag’ as somehow equivalent, in the sense that both have been the subject of controversy,” said Karl Marty.
Marty continued:
“And in the case of the Nazi flag, too many folks are too ready to excuse or both sides unambiguous hate speech. And I hate that we have to keep explaining in very small words that there can be no compromise with a genocidal ideology, that it must be shamed and driven out of the community. Meanwhile, Pride flags are a problem because bigots hate having to see evidence of queer persistence and joy.”