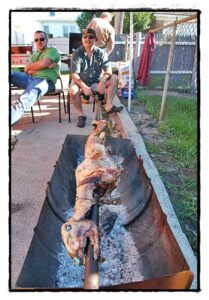 In a divided vote, the city council has banned animal sacrifices at homes in the city – even for religious reasons. But that decision may change in the coming weeks. File photo

By Charles Sercombe
As it stands now, slaughtering an animal at home is still banned in Hamtramck.
In a 3-2 decision, the city council agreed to update the city’s ordinance on animals. As part of that new version, a slim majority of the council voted against allowing home slaughtering.
It’s a decision that has a number of the Muslim faith upset, who say that the home slaughtering is part of their religious practice.
“This is part of our religion,” said Abdul Khalique. “It’s been practiced for decades.”
But there were also concerns raised by a number of residents over the possible harm to the community’s health over sanitary conditions from animal waste.
One resident noted that slaughtering animals in backyards could lead to cross-contamination because there is no proper way to dispose of the remains.
Lynn Blasey, who ran for council last year but lost, said that, while the city has to be sensitive to religious freedom, there is such a thing as “freedom from religion.”
Ian Ingram simply said that the idea is “foolish.”
But one proponent for the practice, Nasr Hussain, suggested the council allow animal sacrifices to happen for one year as a test run “and see how it goes.”
He also said that those who call the practice “barbaric” are racists.
Councilmember Amanda Jaczkowski said she is willing to compromise on the subject, but first someone has to come up with rules and regulations on how animal sacrifices can be done at home.
“There are no guard rails,” she said.
She also said that allowing this under the shield of religious practice would also “allow anything, as long as people can say its religious.”
Councilmembers Mohammed Hassan and Nayeem Choudhury disagreed and voted to allow the practice.
Hassan said it’s a matter of “protecting religious freedom.”
Choudhury said the practice goes back to the time of “Adam and Eve.”
Jaczkowski warned, though, that bringing religion into the council’s decision making is a “problem, and that’s a line that needs to not be crossed.”
“We cannot become a theocracy,” she added.
In the council’s discussion on the animal sacrifice issue, Ghalib pointed out that people have been doing this all along in the city – even without it being legal.
He said he doubts the practice would be widespread.
“We are exaggerating the problem could be bigger,” he said.
He also warned that not allowing the practice could lead to a lawsuit, a comment that others have made on social media.
Curiously, Mayor Amer Ghalib was not asked to vote on the matter, nor did he remind the city clerk that he can vote on ordinances.
(Under Chapter 12, Section 12-02, the charter permits the mayor to vote on ordinances. The mayor also votes when the council is deadlocked in a tie vote.)
Not only that, but, in another ordinance regarding a change in rental dwelling inspections, he also did not vote.
The Review reached out to Ghalib for comment on why he did not vote on the ordinances, and he said it was “ a mistake where my name was not called to vote on those ordinances. I would consider it as one of those incidents where the city manager, attorney and clerk miss out on and everyone got occupied with the controversial views and didn’t pay attention to the rules.”
Asked about how he will vote on the ordinances, he said wait and see.
“There might be an adjustment and additions to the animal ordinance before bringing it back and I may support it when that happens,” Ghalib said.
“You will find out about my stance on both ordinances when we bring them back for validation because they are considered invalid at this point.”
If the ordinances are reconsidered, there will be a new city councilmember, Muhith Mahmood, on board to weigh on the matter.
Voting with Jaczkowski to not allow animal sacrifices were Councilmember Mohammed Alsomiri and Khalil Refai.
The council has struggled with this issue since June, and it had been tabled for most of that time.
Posted Dec. 2, 2022