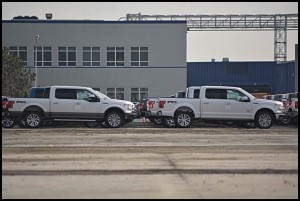 By Charles Sercombe
Is American Axle back into local auto production?
For a second, it appeared that way, when a few hundred Ford F-150 pickup trucks mysteriously began to appear on the lot where a former American Axle plant once operated on Holbrook.
But, alas, that’s not the case.
Not only did American Axle never produce a full vehicle, it no longer owns the site where the trucks are being parked.
But the trucks did generate some excitement online after Mlive.com first reported the matter.
Theories of why the trucks are being parked there ranged all over the place, with some wondering if there was a recall coming up.
The real reason is somewhat less exciting. According to Kathy Angerer, the city’s Director of Community & Economic Development, the site, now owned by a California-based company, Industrial Realty Group LLC, is being leased out to Ford to park its overflow of trucks.
According to industry sources, Ford has overproduced the F-150 model.
Most of the trucks are actually on the Detroit side of Hamtramck border. But some trucks are on the Hamtramck side, which has prompted Angerer to look into getting the property owner to register as a business. She said she did not know how long the lease arrangement will last.
Industrial Realty Group has said it plans to develop the site for manufacturing, but it’s not known what is coming down the road.