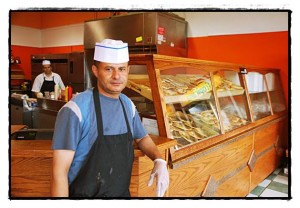 Hamtramck residents no longer have to make the trip to Dearborn for authentic Arabic cuisine.
Earlier this year, Yunus Wasel, owner of the Conant Café, had some renovations done at his restaurant to begin serving a full slate of Arabic foods.

The café, which was formerly the Al Jenah Bakery, is now equipped with a grill, and offers a full menu of Middle Eastern cuisine.

“The city has a huge Arabic community, but I felt like an Arabic style restaurant was something that was missing,” Wasel said.

He began with baked items such as cheese and meat pies. In February, Wasel had some renovations done. He added a grill, which has allowed him to fill out the menu with falafels, chicken and steak subs and several other Middle Eastern meals.

He said, along with the usual bakery orders, the restaurant draws a steady lunch crowd, and has also become a popular dinner location for local high school kids.

The Café is located on Conant at Holbrook, in the Yazan Shopping Plaza.