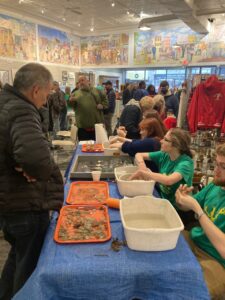 It’s a little metal disc, no bigger than a nickel, and you have to look closely to make out the letters “J. Gass Saloon” imprinted on its weathered surface.
It’s a token that would have been given to a patron of that long-gone saloon that could have been redeemed for a drink. At least, it was 110 years ago or so. Today, it’s an invaluable key to Hamtramck’s history.
The token was one of the hundreds of pieces of Hamtramck’s past that were unearthed by the Wayne State University archaeological students who have been digging up one of the oldest areas of Hamtramck.
On Saturday, Nov. 12, the students presented their findings to the community at the Archaeological Day event held at the Hamtramck Historical Museum. Nearly 100 people came throughout the afternoon to see what the students had found.
Actually, it’s not surprising the students found the token. “There was a saloon on every corner,” said Krysta Ryzewski, WSU anthropology professor who led the team of students. She was referring specifically to the site of the dig, on Jos. Campau within feet of the viaduct at Denton Street.
In about 1911, Charles Faber’s Bar was just south of the Gass saloon, while the Munchinger and Kraft saloons were across the street. It was, at that time, the center of Hamtramck and on the verge of an explosive growth that was prompted by John and Horace Dodge when they opened, the Dodge Main plant, just a ways south of the collection of saloons in 1910.
This was the third archaeological dig Ryzewski and her students have conducted in Hamtramck, and this one offered “an unparalleled insight into the city’s history,” Ryzewski said at the Archaeology Day event.
When Hamtramck was a village in the early 20th century the bars were the center of political power in the then-largely German village. Prohibition put an end to the bars – or, at least, drove them underground. All those bars are long gone but traces are still being found, and in great numbers.
“We’re going to be working and analyzing artifacts for a long time to come,” Ryzewski said. The students found hundreds of items, including beer bottles, pieces of bowls and cups, and even bits of ceramics dolls that may date as far back as the 1880s.
All the items are being cleaned, sorted and catalogued at Wayne State. Later they will be brought to the Hamtramck Historical Museum.
The items help bring a clearer understanding of Hamtramck’s remarkable past – one that focuses greatly on the immigrant influx of the early 20th century. 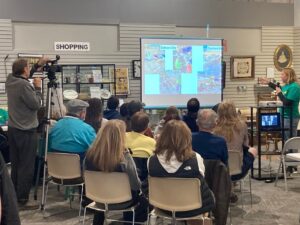 “Context is one of the main things of archaeology,” said Samuel Burns, a professional archaeologist who is on the museum’s board of directors.
To help understand that context, the museum is embarking on a major project to build a “deep catalog.”
Dan Trepal, from Michigan Technological University, gave a brief overview of the “Spatial Mapping” project, now being done on sites in Hamtramck in conjunction with the museum.
This project involves examining the history of specific locations in extreme detail through different phases of their history. It’s like “a Google map through time and space,” Trepal said.
“This is a wonderful place to do that work,” Trepal said.
Developments with the Spatial Mapping program will be announced in the coming months.
And that Gass Saloon token will find a prominent place to be displayed in the Hamtramck Historical Museum.

(Greg Kowalski is the Director of the Hamtramck Historical Museum. The museum is located at 9525 Jos. Campau.)
Posted Nov. 23, 2022