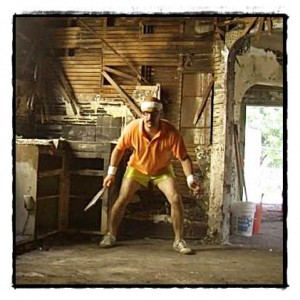 Detroit-based artist Graem Whyte is well known for his sculptures, but his next project is literally as big as a house.

Whyte recently teamed up with Power House Productions (PHP), a nonprofit organization that works to improve cohesion in the Detroit neighborhoods near Hamtramck, to create the Squash House.

The Squash House project is taking the house at 13133 Klinger and turning it into a venue for a variety of sports such as squash, racquetball, handball and others. Whyte said the house will combine art with sports with a unique design to create an artistic experience for the people in the community.

“The house itself will be artwork,” said Whyte.

The specifics of the house’s appearance will include sculpted designs both inside and outside.

Whyte describes the finished project as “interactive,” with items such as the squash court and ping pong table being artistically modified with a unique look.

The project is currently in the fundraising stage. Whyte said he is applying for grants, but individuals can make donations through crowdrise.com/squashhouse/fundraiser/graemwhyte.

Once completed, the Squash House will be available for art related events, community activities and other functions. However, art and community unification aren’t the project’s only goals. 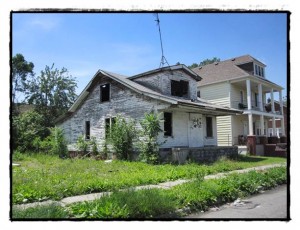 “We want it to be as green as possible,” Whyte said. “We’re trying to reuse as many materials as we can.”

The completed house is expected to use solar panels for lighting and wind power for electrical needs. Also, materials for the project will be taken from other abandoned houses that can no longer be repaired.

The yard and an adjoining lot will also be put to good use.

Along with some outdoor game courts, such as badminton and volleyball, the yard will be a community garden for – you guessed it — squash and other vegetables.

Rain water, Whyte said, will be used to maintain the garden.

The Squash House is expected to be finished in the fall of 2012. In the meantime, some examples of Whyte’s work can be seen at graemwhyte.com.

(Editor’s note: A big thanks to Eve Doster Knepp for giving us a heads-up on this project.)