As election nears, the party faithful show their support 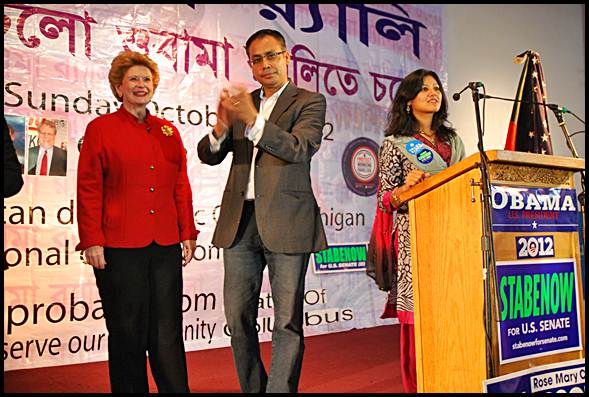 Sen. Debbie Stabenow was one of many elected officials who stopped by an Obama campaign rally last week at the Gates of Columbus Hall.

It was a festive evening on Sunday.

Democratic Party supporters and candidates made Hamtramck the place to be that evening with two political rallies and a motorcade parade.

The evening kicked off with a rollicking motor parade down Conant to Holbrook to Jos. Campau and then up Carpenter and back to the Kabob House on Conant where it began.

With a police escort, cars honked all along the way. Congressman Peters was riding in the back seat of a convertible, beaming with a wide smile.

The Bangladeshi community has embraced the congressman in his re-election bid.

The star moment of the night, however, belonged to Sen. Stabenow. Arriving at the Gates of Columbus Hall, she was treated to a standing ovation.

Stabenow electrified the 200 hundred or so in attendance, saying: “We are all in this together. … In the big picture, this is probably the most important election in my life.”

The message of the night wasn’t so much about local candidates, but showing support for President Obama, who at the time we went to print was one percentage point behind Republican candidate Mitt Romney. 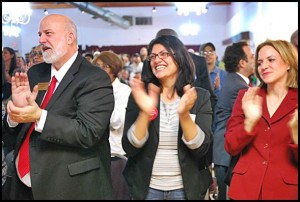 Congressman Peters drove the message home about why the party faithful have to come out on election day.

“Obama cares for 100 percent of the American people and proposes to implement an affordable health care policy for all.”

He also noted that Obama is a friend of Detroit. Speaking critically of Governor Romney, Peters praised Obama for saving Detroit’s auto industry, which Romney had proposed to allow it to collapse.