Assault victim getting better, but will likely never be the same 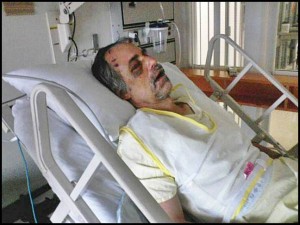 Assault victim Nick Veselenak is recuperating from his injuries at a nursing home. He is expected to survive a brutal beating committed by two teens, but it’s likely he will suffer permanent brain damage. Photo courtesy of the Hamtramck FOP Lodge.

In a rare move, one of the teens accused of severely beating a southend resident has agreed to an early plea deal and will testify against his former co-defendant.

On Tuesday, a preliminary examination was held for De’Vante Howard, 14, of Hamtramck, and Martell Dewberry, 13, of Detroit.

They are accused of beating Nick Veselenak, 60 of Danforth St., into unconsciousness for no apparent reason on Oct. 12.

Detective Jackie Crachiola said that at Tuesday’s exam, Howard entered a plea of assault to do great bodily harm less than murder. It’s rare for defendants to enter a plea at the preliminary examination level. His original charge, a variation of a murder charge, carried a life sentence in prison.

The maximum penalty for the reduced charge is 10 years in prison, but Crachiola said Howard has a chance of being released earlier if he successfully completes a rehabilitation program.

The plea requires Howard to testify against Dewberry.

Veselenak, who is known by the street name of “Casper,” has been transferred from a hospital to a nursing home, Crachiola said. She said that although he has regained consciousness and is talking, he does not recognize people he knows.

The two teens approached Veselenak at about 11 p.m. on Oct. 12, and started beating him without provocation. Crachiola said they could have been playing a so-called game of “put them to sleep.”

The object of the “game” is to beat someone unconscious.

Although both teens are being charged as adults, they remain in custody at the Wayne County Juvenile Detention facility.

Veselenak was considered semi-homeless and was known for caring for stray cats and helping his neighbors. He could often be seen walking up and down Jos. Campau, wearing earphones and occasionally rummaging through city trash cans.

A number of police officers knew him and had friendly exchanges with him Police Chief Max Garbarino said his officers took Veselenak’s assault personally.

One Response to Assault victim getting better, but will likely never be the same