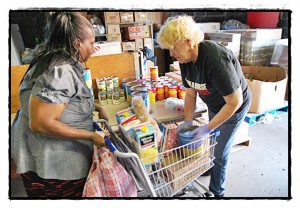 A client (left) with Friendship House receives a cart-full of food during the monthly food pantry give-away. The state recently cut funding that was used to purchase food at a discount.

For Debbie Neal, it’s going to be a difficult choice if the monthly Friendship House food pantry closes down.

“I’ll have to do without. It’s either medicine or food,” she said.

That decision may have to come soon if Friendship House’s pleas to supporters and other food banks go unanswered.

“If no money comes in for the holidays,” said Kim Ulasevics of Friendship House, “we’ll have to close.”

Last week, the organization received a phone call from a local official from the state Department of Human Services, who said state funding had been cut off for all food pantries throughout the state.

That call came a day before state funding was supposed to be renewed for the year. Friendship House had been receiving $12,240 a year, which was used to purchase food from other pantries at a discount.

It had been receiving the state payment for 13 years, along with other donations, and it has gone a long way toward keeping the pantry open.

Now, with the money dried up, the pantry received a total of less than one truckload of food instead of the usual three full loads this past week.

It’s unknown why state funding has been cut, but then (under Gov. Rick Snyder and his Republican colleagues) the emergency welfare payments have also been cut.

Ulasevics finds it odd, even suspicious, that the state has not given the organization written notice of the cutoff.

She also pointed out that a judge halted the state’s cutoff on emergency welfare payments because it failed to notify its clients in writing.

Notifications of the welfare cut are going out this week, according to news reports.

On Tuesday, a representative from the Lansing DHS office told The Review she did not know why funding has been stopped, but promised to look into it.

As of press time on Thursday, the state had not called back.

At Friendship House, 1,500 people from Hamtramck and the nearby Detroit neighborhoods use its services. At this point, the organization cannot take on new clients.

A mailing has gone out to known donors, asking them to dig a little deeper into their bank accounts for a donation.

“Not only do we have to worry about next month, but also Thanksgiving and Christmas,” Ulasevics said.

2 Responses to At Friendship House, concern grows over food cut